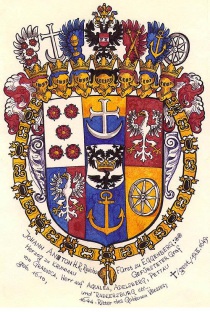 Eggenberg was the name of an Austrian noble family from Styria, who achieved princely rank in the 17th century. The family's last male heir died in 1717, bringing an end to the House of Eggenberg.

The origin of the Austrian noble house of Eggenberg is shrouded in darkness. The Counter-Reformation with its struggles between the Catholic court of the Habsburgs and the Protestant nobility belongs to those moving times in which the destiny of some families changed abruptly. While old, Protestant-minded nobles lost power and their native lands, families loyal to the emperor were raised to new nobility and garnered great wealth. A good example of this is the meteoric rise of the Eggenberg family. They had become rich vintners in Radkersburg, and then expanded their operations to be financiers to the nobility and local lords loyal to the emperor.

It was the younger cousin of Ruprecht, Hans Ulrich von Eggenberg, from the main Graz line who brought the family to their ultimate prominence. Graz was the seat of power for the Habsburg archdukes of Inner Austria from 1564 to 1619. It was during this period that Hans Ulrich, having received a very good Protestant education at the Tübinger Stift, converted to Catholicism in order to serve his lord, Archduke Ferdinand. In 1619, at the onset of The Thirty Years War, Archduke Ferdinand was elected Ferdinand II, Holy Roman Emperor and, owing to his own faith and the strong influence of his devoted mother, Archduchess Maria Anna of Bavaria he prosecuted the Counter-Reformation in the Habsburg hereditary lands and the Holy Roman Empire which led to the Thirty Years War between Protestant and Catholic Princes in the Empire as well as the House of Habsburg and the House of Bourbon. Under the influence of Cardinal Richelieu and his anti-Habsburg policy, the Catholic French supported the Protestant, German Princes against the Emperor.

The only son of Hans Ulrich, Johann Anton I von Eggenberg, Holy Roman Prince (1610–1649) enjoyed his education at, among others, the Jesuit University in Graz. In the end, after an extensive gentleman's tour of the whole of Europe he returned to Graz in 1632. At this time he exerted his efforts in a broad renovation of Schloss Eggenberg. Nevertheless, his preferential residences were the Palais Eggenberg on the Sackstrasse in the Graz Old Town and the residence in Cesky Krumlov. He also entered into the service of the imperial court and proved himself under Emperor Ferdinand III. An important goal for Johann Anton I was the acquisition of the Imperial Estate, which had amazingly eluded his father, Hans Ulrich. However, in 1647, the emperor granted him the possibility to buy the princely shire of Gorz with the town Aquileia as well as a few other localities. With these acquisitions the Eggenbergs were prosperous not only in Habsburg Hereditary but also within the Holy Roman Empire. Thus, the Eggenbergs now had the right to a seat in the Imperial Diet.

1629. Eggenberg. Johann Ulrich (1568-1634) Taler. Prague mint. Fully impressive in both eye appeal and technical quality, this scarce taler features the bust of Johann Ulrich, prominent statesman and loyal ally of Ferdinand II. The expansive surfaces are beautifully patinated from years of cabinet storage, showing mottled shades of dove and graphite gray throughout, accentuated by luminous hues of salmon that rest against the raised devices. Between flares of original luster and sharply defined illustrations, this winsome offering is an ideal representative of the type, and at present time, is the only certified example of this rare, singular issue. This coin was minted in 1630-33 for the obscure Austrian family of Eggenberg. This type was struck the one year only and is rare, like all the issues from this locale. NGC MS-61.