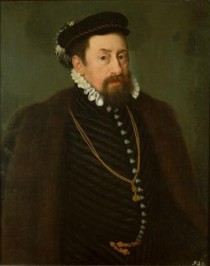 Maximilian II, (born July 31, 1527, Vienna, Austria—died Oct. 12, 1576, Regensburg [Germany]), Holy Roman emperor from 1564, whose liberal religious policies permitted an interval of peace between Roman Catholics and Protestants in Germany after the first struggles of the Reformation. A humanist and patron of the arts, he largely failed to achieve his political goals, both at home and abroad.

Maximilian, the eldest son of the future emperor Ferdinand I and the nephew of the emperor Charles V, received his education in Spain. In a dispute over the Habsburg succession order, he was at first placed behind Charles V's son Philip (the future Philip II of Spain), but, by a 1553 agreement, he displaced Philip as heir to the empire and remained hostile to the Spanish branch of the Habsburgs.

Maximilian's sympathies for Lutheranism, formed in his youth, eventually caused sufficient scandal in Habsburg circles for his father to threaten him with exclusion from the succession in 1559. Henceforth, although he paid lip service to Roman Catholicism, he remained basically a humanist Christian who favoured compromise between the rival confessions.

Already Bohemian king (from September 1562) and king of the Romans, or successor-designate to the empire (from November 1562), Maximilian became Hungarian king in 1563 and succeeded to the imperial throne in 1564. His refusal to invest Protestant administrators of bishoprics with their imperial fiefs disappointed the hopes of Germany's Protestant princes. Yet he proved his personal liberalism by granting freedom of worship to the Protestant nobility of Austria (1568), promising to respect religious liberty in Bohemia (1575), and working for the reform of the Roman Catholic church. His efforts to gain the right of marriage for priests failed, largely because of the opposition of Spain.

In the Netherlands, Maximilian advised compromise between Catholics and Protestants but was again frustrated by Spanish intransigence. After fighting an unsuccessful campaign against the Turks, who remained a threat to the empire, he was compelled by a peace concluded in 1568 to continue to pay tribute to the sultan. His proposed army reform of 1570, by which the emperor would have controlled the army and would have had to grant his consent before foreign powers could recruit on German soil, was defeated by Germany's Protestant princes, who suspected an attempt to prevent them from assisting coreligionists abroad and were less willing to grant greater powers to the emperor.

Maximilian's religious neutrality was largely a policy of political expediency in maintaining peace in the empire. Yet, although he preserved the right of his subjects to worship according to their beliefs, he succeeded in few of his political aims.