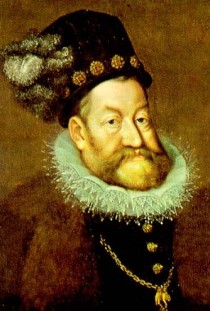 The eldest surviving son of the emperor Maximilian II and Maria, who was the daughter of the emperor Charles V, Rudolf was crowned king of Hungary in 1572 (as Rudolf) and of Bohemia in 1575 (as Rudolf II). He succeeded his father as emperor and as archduke of Austria (as Rudolf V) on Oct. 12, 1576.

Subject to fits of severe depression, Rudolf soon retired to Prague, where he lived in seclusion, dabbling in the arts and sciences. During the first 20 years of his rule disputes between Roman Catholic and Protestant factions crippled the political institutions of the empire. In Austria Rudolf reversed Maximilian II's tolerant religious policy and sought to limit the political privileges of the Protestant Estates (the nobles and representatives of the towns).

The emperor's mental instability grew worse after 1598, and in 1605 the Habsburg archdukes, long dissatisfied with his political incompetence, compelled him to entrust the conduct of Hungarian affairs to his brother Matthias. In 1606 they recognized Matthias as their head and as their candidate for Rudolf's succession. Two years later Rudolf was forced to cede Hungary, Austria, and Moravia to Matthias and to promise him the succession in Bohemia. When mutinous imperial troops under the archduke Leopold ravaged Bohemia with Rudolf 's support in 1611, the Bohemian Estates sought help from Matthias, whose army virtually held Rudolf prisoner in Prague until he yielded Bohemia to Matthias in May. Although Rudolf prevented Matthias' preliminary election as king of the Romans (successor-designate to the empire), Matthias gained the imperial throne five months after Rudolf's death.