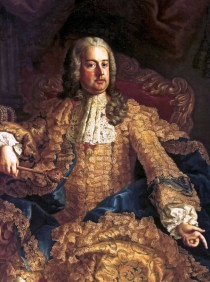 Francis I (Francis Stephen; 8 December 1708 – 18 August 1765) was Holy Roman Emperor and Grand Duke of Tuscany, though his wife effectively executed the real powers of those positions. With his wife, Maria Theresa, he was the founder of the Habsburg-Lorraine dynasty. From 1728 until 1737 he was Duke of Lorraine, but lost this title when Lorraine was seized by France in the War of the Polish Succession; he was compensated with Tuscany in the peace treaty that ended that war. He was the father of the deposed and later executed French Queen Marie Antoinette.

Francis was born in Nancy, Lorraine (now in France), the oldest surviving son of Leopold Joseph, duke of Lorraine, and his wife Élisabeth Charlotte d'Orléans, daughter of Philippe, duc d'Orléans.

He was connected with the Habsburgs through his grandmother Eleonor, daughter of Emperor Ferdinand III, and wife of Charles Leopold of Lorraine, his grandfather. He was very close to his brother and sister Anne Charlotte.

Emperor Charles VI favored the family, who, besides being his cousins, had served the house of Austria with distinction. He had designed to marry his daughter Maria Theresa to Francis' older brother Leopold Clement. On Leopold Clement's death, Charles adopted the younger brother as his future son-in-law. Francis was brought up in Vienna with Maria Theresa with the understanding that they were to be married, and a real affection arose between them.

At the age of 15, when he was brought to Vienna, he was established in the Silesian Duchy of Teschen, which had been mediatized and granted to his father by the emperor in 1722. Francis Stefan of Lorraine succeeded his father as Duke of Lorraine in 1729. In 1731 he was initiated into freemasonry (Grand Lodge of England) at a specially convened lodge in The Hague at the house of the British Ambassdor, Philip Stanhope, 4th Earl of Chesterfield. During a subsequent visit to England, Lorraine was made a Master Mason at another specially convened lodge at Houghton Hall, the Norfolk estate of British Prime Minister Robert Walpole.

Maria Theresa arranged for Francis to become "Lord Lieutenant" (locumtenens) of Hungary in 1732. He was not excited about this position, but Maria wanted him closer to her. In June 1732 he agreed to go to Pressburg.

When the War of the Polish Succession broke out in 1733, France used it as an opportunity to seize Lorraine, since France's prime minister, Cardinal Fleury, was concerned that, as a Habsburg possession, it would bring Austrian power too close to France.

A preliminary peace was concluded in October 1735 and ratified in the Treaty of Vienna in November 1738. Under its terms, Stanisław Leszczyński, the father-in-law of King Louis XV and the losing claimant to the Polish throne, received Lorraine, while Francis, in compensation for his loss, was made heir to the Grand Duchy of Tuscany, which he would inherit in 1737.

Although fighting stopped after the preliminary peace, the final peace settlement had to wait until the death of the last Medici Grand Duke of Tuscany, Gian Gastone in 1737, to allow the territorial exchanges provided for by the peace settlement to go into effect.

In March 1736 the Emperor persuaded Francis, his future son-in-law secretly to exchange Lorraine for the Grand Duchy of Tuscany. France had demanded that Maria Theresa's fiancé surrender his ancestral Duchy of Lorraine to accommodate the deposed King of Poland. The Emperor considered other possibilities (such as marrying her to the future Charles III of Spain) before announcing the engagement of the couple. If something were to go wrong, Francis would become governor of the Austrian Netherlands.

Elisabeth of Parma had also wanted the Grand Duchy of Tuscany for her son Charles III of Spain; Gian Gastone de' Medici was childless and was related to Elisabeth via her great grandmother Margherita de' Medici. As a result Elisabeth son's could claim by right of being a descendant of Margherita.

On January 31, 1736 Francis had agreed to marry Maria Theresa. He hesitated three times (and laid down the feather before signing). Especially his mother Élisabeth Charlotte d'Orléans and his brother Prince Charles Alexander of Lorraine were against the loss of Lorraine. On February 1, Maria Theresa sent Francis a letter: she would withdraw from her future reign, when a male successor for her father appeared.

They married on February 12 in the Augustinian Church, Vienna. The wedding was held on February 14, 1736. The (secret) treaty between the Emperor and Francis was signed on May 4, 1736. In January 1737, the Spanish troops withdrew from Tuscany, and were replaced by 6,000 Austrians. On January 24, 1737 Francis received Tuscany from his father-in-law. Until then, Maria Theresa was Duchess of Lorraine.

Gian Gastone de' Medici, who died on 9 July 1737, was the second cousin of Francis. In June 1737 Francis went to Hungary again to fight against the Turks. In October 1738 he was back in Vienna. On December 17, 1738 the couple travelled south, accompanied by his brother Charles to visit Florence for three months. They arrived on January 20, 1739.

In 1744 Francis' brother Charles married a younger sister of Maria Theresa, Archduchess Maria Anna of Austria (1718–1744). In 1744 Charles became governor of the Austrian Netherlands, a post he held until his death in 1780.

Maria Theresa secured in the Treaty of Füssen his election to the Empire on 13 September 1745, in succession to Charles VII, and she made him co-regent of her hereditary dominions.

Francis was well content to leave the wielding of power to his able wife. He had a natural fund of good sense and some business capacity and was a useful assistant to Maria Theresa in the laborious task of governing the complicated Austrian dominions, but his functions appear to have been primarily secretarial. He also took a great interest in the natural sciences. He was a member of the Freemasons.

Francis was quite the philanderer and was known for his many indiscreet affairs, notably one with Maria Wilhelmina, Princess of Auersperg, who was thirty years his junior. This particular affair was remarked upon in the letters and journals of visitors to the court and in those of his children.

He died suddenly in his carriage while returning from the opera at Innsbruck on 18 August 1765. He is buried in tomb number 55 in the Imperial Crypt in Vienna.

Maria Theresa and Francis I had sixteen children—their youngest daughter was the future queen consort of France, Marie Antoinette (1755–1793). He was officially succeeded by his eldest son Joseph II although the real power remained with his wife. Another son was the Emperor Leopold II.