Charles succeeded his father in the Netherlands; he followed one grandfather, Ferdinand, as king of Spain in 1516, and when the other, Maximilian, died in 1519 he became the emperor Charles V., and succeeded to all the hereditary lands of the Habsburgs. The Habsburgs had now reached the summit of their power. The prestige which belonged to Charles as head of the Holy Roman Empire was backed by the wealth and commerce of the Netherlands and of Spain, and by the riches of the Spanish colonies in America. In Italy he ruled over Sardinia, Naples and Sicily, which had passed to him with Spain.

When Charles V. abdicated he was succeeded as emperor, not by his son Philip, but by his brother Ferdinand. Philip became king of Spain, ruling also the Netherlands, Franche-Comtfi, Naples, Sicily, Milan and Sardinia, and the family was definitely divided into the Spanish and Austrian branches. For Spain and the Spanish Habsburgs the 17th century was a period of loss and decay.

Finally Charles II., the last Habsburg king of Spain, died childless in November 1700, and his lands were the prize of the War of the Spanish Succession. In 1700 Philip V of Spain, Duke of Anjou, and grandson of Louis XIV of France, was declared heir of the kingdoms of Spain, Naples, and Sicily by his grand-uncle Charles, the late King. The succession, on the other hand, was claimed by Leopold I, Emperor of Germany, for his son the Archduke Charles, as the heir of the elder branch of the House of Austria. The War Of The Spanish Succession ensued, and lasted for 11 years, 1700-1713.

Charles VI, Archduke of Austria, second son of the Emperor Leopold I, by his third wife Eleonora Magdalen Teresa, Princess of Palatine Newburgh (afterwards the Emperor Charles VI). Count Daun entered Naples with the imperial army, July 7th, 1707. The Austrian Habsburgs fought long and valiantly for the kingdom of their kinsman, but Louis XIV. was too strong for them, and by the peace of Rastatt Spain passed from the Habsburgs to the Bourbons.

However, the Austrian branch of the family received in 1714 the Italian possessions of Charles II., except Sicily, which, was given to the duke of Savoy. By the peace of Utrecht in 1713 the House of Bourbon was excluded from Italy; Philip was confirmed as King of Spain, by the title of Philip V.; Naples was made over to the German branch of the House of Austria; and Sicily was separated from Naples and given to Victor Amadeus, Duke of Savoy.

The hostility of Austria and France, or rather of Habsburg and Bourbon, outlived the War of the Spanish Succession. In 1717 Spain conquered Sardinia, which was soon exchanged for Sicily by Austria. Sicily was restored to the crown of Naples in 1720 by the war of the Quadruple Alliance, the island of Sardinia being given to Victor Amadeus in exchange, with the title of King of Sardinia. Other struggles and other groupings of the European powers followed, and in 1735, by the treaty of Vienna, Austria gave up Naples and Sicily and received the duchies of Parma and Piacenza. These surrenders were doubtless inevitable, but they shook the position of the house of Habsburg in Italy. 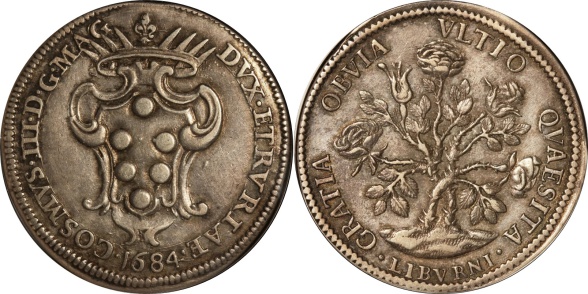 1781. Venice. 129th Doge, Paolo Renier (1779-1789) Tallero - "Tallero per il Levante". DAV-1568. Pap-84; Paolucci-35; Montenegro-3104. KM-C104. Obv: Allegorical female bust of Republic to right, wearing tiara and doge's ermine robe, legend ends with arabesque. Lettering: RESPUBLICA VENETA. Rev: Nimbate Lion of St. Mark seated to right on pedestal with A on left edge, S on right edge, open book in forepaws, date in exergue. Lettering: PAULO RAINERIO DUCE ·A· ·S· (Antonio Schabel, Engraver) 1781. This type was struck 1781-88 and does not turn up often. It was accompanied by one-eighth, one quarter and one half tallero coins. The Republic was occupied by Napoleon in 1797 and traded by him to Austria, which held it until 1866. PCGS MS-65.