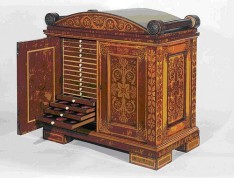 I have spent the past 10 years building my collection of 16-19th century Talers depicting the various Habsburg Holy Roman Empire Emperors and designs.  In my efforts, I try to attain quality pieces reflective of the respective era focusing on both quality and scarcity.

I find the Austro-Hungarian and German State designs as the most appealing in numismatics, where cutting edge minting technology of the time captured the spirit of the dynasty.

While aiming for eye appealing, higher grade coins, there are certain varieties which are considered scarce given the low mintage or preservation state. I am continuously seeking additional pieces for this representative set. I have put together this site to showcase the collection along with relevant history, while allowing for easy display of any additional pieces I add from time to time. I am always looking to meet people interested in this theme and/or seeking to trade/sell certain pieces from their collection.