The History and Register of The Nobility of Austria Website Link 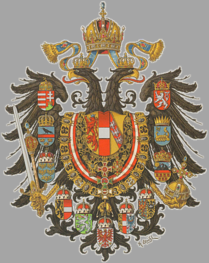 Historically, the Austrian nobility (German: österreichischer Adel) was a privileged social class in Austria. The nobility was officially abolished in 1919 after the fall of the Austro-Hungarian Empire. Former noble families and their descendants are still a part of Austrian society today, but they no longer retain any specific privileges. Austria's system of nobility is very similar to Germany's system, as both countries were previously part of the Holy Roman Empire.

Any noble living in the Habsburg-ruled lands, and who owed their allegiance to the dynasty and the Emperor of Austria, were also considered part of the Austrian aristocracy. This applied to any member of the Bohemian, Hungarian, Polish, Croatian, Dalmatian and other nobilities in the Habsburg dominion.

Attempting to differentiate between ethnicities can be quite confusing, especially for nobles during the time of the Austro-Hungarian Empire. A noble from Galicia, for example, could call himself a Polish noble, but he also rightfully belonged to the Austrian nobility.

Religion, just like ethnicity, was also not used for any categorisation purpose. Austrian nobility could belong to any of the religions within the Habsburg empire, such as Roman Catholic nobles in Austria, Hungary, Croatia, Dalmatia, Slovenia and Poland, Protestants in Bohemia and Transylvania, Greek Catholics in eastern Galicia, Orthodox Serbs in Vojvodina, as well as nobles of Jewish faith.

When speaking of "Austrian nobility", two categories can be made: 1) the historic nobility that lived in the territories of the Habsburg empire and who swore allegiance to the dynasty, which included everyone until 1918; 2) the present, post-1918 Austrian nobility, specifically those who today retain Austrian citizenship, whose family originally come from Austria proper, South Tyrol (Italy) and Burgenland, or who were ennobled at any point under Austrian rule and identify themselves as belonging to that class.