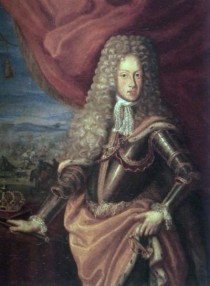 The eldest son of the emperor Leopold I, Joseph became king of Hungary in 1687 and king of the Romans, the imperial successor-designate, in 1690. When Charles II, the last Spanish Habsburg, died in 1700, Joseph supported the candidacy of his own younger brother Charles (the future emperor Charles VI) against the French king Louis XIV's grandson Philip (later Philip V of Spain). During the long War of the Spanish Succession (1701–14), Joseph succeeded to the imperial throne, in May 1705.

He reorganized Austria's chaotic finances and converted the Viennese city bank into a state institution, measures that made Austria better able to finance its military struggle, though it continued to depend on foreign subsidies. Joseph's brilliant commander Prince Eugene of Savoy led Austria's armies to victory in Italy, Germany, and the Netherlands, but new enemies constantly threatened his domains. A revolt in Hungary, fomented by Louis XIV and led by Ferenc II Rákóczi, was not finally suppressed until after Joseph's death.

In 1707 the Emperor narrowly avoided war with Charles XII of Sweden, who had violated Austrian territory during his struggle with Frederick Augustus I of Saxony (Augustus II the Strong as king of Poland). In 1708 a conflict between the Emperor and the Pope reached a climax when Clement XI recognized Philip as king of Spain. Austrian troops attacked the Papal States until the Pope again supported the Habsburg cause in 1709. The Emperor's sudden death in 1711 deprived the Habsburgs of the Spanish succession, since the European powers would not countenance a revival of Charles V's global empire under Joseph's brother and successor, Charles VI.