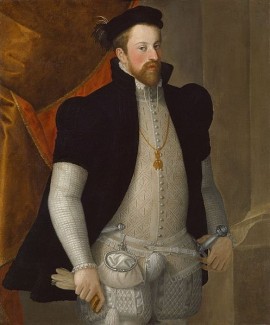 Archduke Ferdinand of Austria was the second son of Ferdinand I, Holy Roman Emperor and Anna of Bohemia and Hungary. He was a younger brother of Emperor Maximilian II. At the behest of his father, he was put in charge of the administration of Bohemia in 1547. He also led the campaign against the Turks in Hungary in 1556.

In 1557 he was secretly married to Philippine Welser, daughter of a patrician from Augsburg, with whom he had several children. The marriage was only accepted by Emperor Ferdinand I in 1559 under the condition of secrecy. The children were to receive the name "of Austria" but would only be entitled to inherit if the House of Habsburg became totally extinct in the male line (See also: morganatic marriage). The sons born of this marriage received the title Margrave of Burgau, after the Margraviate of Burgau an ancient Habsburg possession in Further Austria. The younger of the sons, who survived their father, later received the princely title of Fürst zu Burgau.

After his father's death in 1564, Ferdinand became the ruler of Tirol and other Further Austrian possessions under his father's will. However, he remained governor of Bohemia in Prague until 1567 according to the wishes of his brother Maximilian II.

In his own lands, Ferdinand made sure that the Catholic counterreformation would prevail. He was an avid collector of art and the collection of the famous Castle Ambras near Innsbruck was started in his time. He had begun to work on it even during his time in Bohemia and subsequently moved it to Tyrol. In particular, the gallery of portraits and the collection of armor were highly expensive, which is why the archduke incurred a high level of debt. Today these collections are in the Kunsthistorisches Museum in Vienna and at Castle Ambras.

After the death of Philippine in 1580, he married Anne Catherine, a daughter of William I, Duke of Mantua, in 1582.

Archduke Ferdinand died on 24 January 1595. Since his sons from the first marriage were not entitled to the inheritance, and the second produced only surviving daughters, Tirol was reunified with the other Habsburg lines. His daughter from the Mantuan marriage became the Empress Anna, consort of Emperor Mathias, who received his Further Austrian inheritance.