The Archbishopric of Salzburg was a Prince-Bishopric and state of the Holy Roman Empire for many centuries. The diocese arose from St Peter's Abbey, founded in the German stem duchy of Bavaria about 696 by Saint Rupert at the former Roman city of Iuvavum (Salzburg).

In the 13th century it reached Imperial immediacy and independency from Bavaria, and remained an ecclesiastical state until its secularisation to the short-lived Electorate of Salzburg in 1803. The Prince-Archbishops had never obtained electoral dignity; actually of the four Prince-archbishoprics of the Holy Roman Empire—with Mainz, Trier and Cologne—Salzburg was the only one that got nothing from the Golden Bull of 1356. The last Prince-Archbishop exercising secular authority was Count Hieronymus von Colloredo, an early patron of Salzburg native Wolfgang Amadeus Mozart. The bishopric's territory was roughly congruent with the present-day Austrian state of Salzburg. It stretched along the Salzach River from the Hohe Tauern range—Mt. Großvenediger at 3,666 m (12,028 ft)—at the main chain of the Alps in the south down to the Alpine foothills in the north. Here it also comprised the Rupertiwinkel on the western shore of the Salzach, which today is part of Bavaria, Germany. The former episcopal lands are traditionally subidivided into five historic parts (Gaue): Flachgau with the Salzburg capital and Tennengau around Hallein are both located in the broad Salzach valley at the rim of the Northern Limestone Alps, the mountainous (Innergebirg) southern divisions are Pinzgau, Pongau around Bischofshofen, and southeastern Lungau beyond the Radstädter Tauern Pass.

In the north and east, the prince-bishopric bordered on the Duchy of Austria (Archduchy from 1457), nucleus of the Habsburg Monarchy. The Salzkammergut border region, today a UNESCO World Heritage Site, as an important salt trade region was gradually seized by the mighty House of Habsburg and incoproated into Upper Austria. In the southeast, Salzburg adjoined the Duchy of Styria, also ruled by the Habsburg (arch-dukes in personal union since 1192. By 1335, the Austrian regents had also acquired the old Duchy of Carinthia in the south, the Styrian and Carinthian territories were incorporated into Inner Austria in 1379.

The Habsburg encirclement was nearly completed, when in 1363 the archdukes also attained the County of Tyrol in the west. Only in the northwest, Salzburg bordered on the Duchy of Bavaria (raised to an Electorate in 1623), to which it formerly belonged to, and the tiny Berchtesgaden Provostry which was able to retain its independency until the Mediatisation in 1803. 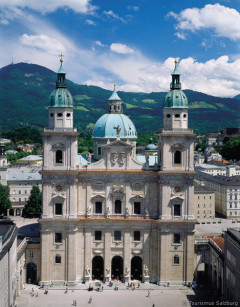 Eberhard was excommunicated in 1245 after refusing to publish a decree deposing the emperor and died suddenly the next year. During the German Interregnum, Salzburg also suffered confusion. Philip of Spanheim, heir to the Dukedom of Carinthia, refused to take priestly consecrations, and was replaced by Ulrich, Bishop of Seckau.

King Rudolph I of Habsburg quarrelled with the archbishops through the manipulations of Abbot Henry of Admont, and after his death the archbishops and the Habsburgs made peace in 1297. The people and archbishops of Salzburgs remained loyal to the Habsburgs in their struggles against the Wittelsbachs. When the Black Death reached Salzburg in 1347, the Jews were accused of poisoning the wells and suffered severe persecution. The Jews were expelled from Salzburg in 1404. Later, the Jews were allowed to return but were forced to wear pointed hats.

Conditions were at their worst during the reign of Bernard II of Rohr. The country was in depression, local authorities were raising their own taxes and the Turks were ravaging the archdiocese. In 1473, he summoned the first provincial diet in the history of the archbishopric, and eventually abdicated. It was only Leonard of Keutschach (reigned 1495–1519) who reversed the situation. He had all the burgomasters and town councillors (who were levying unfair taxes) arrested simultaneously and imprisoned in the castle. His last years were spent in bitter struggle against Matthäus Lang of Wellenburg, Bishop of Gurk, who succeeded him in 1519.

Matthäus Lang was largely unnoticed in official circles, although his influence was felt throughout the archbishopric. He brought in Saxon miners, which brought with them Protestant books and teachings. He then attempted to keep the populace Catholic, and during the Latin War was besieged in the Hohen-Salzburg, declared a "monster" by Martin Luther, and two later uprisings by the peasants lead to suffering to the entire archdiocese. Later bishops were wiser in the ruling and spared Salzburg the religious wars and devastations seen elsewhere in Germany. Archbishop Wolf Dietrich von Raitenau gave the Protestants the choice of either to live Catholic or leave. The Cathedral was rebuilt in such splendour that it was unrivalled by all others north of the Alps.

Archbishop Paris of Lodron led Salzburg to peace and prosperity during the Thirty Years' War in which the rest of Germany was thoroughly devastated. During the reign of Leopold Anthony of Firmian, Protestants emerged more vigorously than before in 1731. He invited the Jesuits to Salzburg and asked for help from the emperor, and finally ordered the Protestants to recant or emigrate - about 30,000 people left and settled in Württemberg, Hanover and East Prussia, and a few settled in Ebenezer, Georgia in what would become the United States of America. The last Prince-Archbishop, Hieronymus von Colloredo, is probably best known for his patronage of Mozart. His reforms of the church and education systems alienated him from the people.

In 1803, Salzburg was secularised as the Electorate of Salzburg for the former Grand Duke Ferdinand III of Tuscany (brother of Emperor Francis II), who had lost his throne. In 1805 it came to Austria, and in 1809 to Bavaria, who closed the University of Salzburg, banned monasteries from accepting novices, and banned pilgrimages and processions. The archdiocese was reestablished as the Roman Catholic Archdiocese of Salzburg in 1818 without temporal power.

Up to today, the Archbishop of Salzburg has also borne the title Primas Germaniae ("First [Bishop] of Germany"). The powers of this title – non-jurisdictional – are limited to being the Pope's first correspondent in the German-speaking world, but had been used to include the right to preside over the Princes of the Holy Roman Empire. The Archbishop also has the title of Legatus Natus ("born legate") to the Pope, which, although not a cardinal, gives the Archbishop the privilege of wearing red vesture (which is much deeper than a cardinal's scarlet), even in Rome.