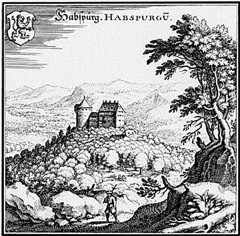 For more than five centuries the House of Habsburg (often spelt Hapsburg) was the greatest ruling family in European history and their influence stretched into the 20th Century.

Ironically Europe's greatest ever Ruling Family originates from intensely republican Switzerland. Between 1020-1030 Count Radbot (985-1045) constructed Habsburg Castle in his feudal lands of Aargau and for almost four centuries this Medieval estate was home to Europe's most powerful and ambitious dynasty.

Through marriage and politics the Habsburgs acquired a growing collection of titles and from 1273 till its end in 1806, the Habsburg family came to dominate the elected throne of the Holy Roman Empire with its capital in Vienna. In 1415 Aargau joined the Swiss Confederation forcing the Habsburgs to relocate their seat of power to Vienna. In 1477 Archduke Maximilian I married Mary of Burgundy bringing her realms of the Low Countries and parts of France under Hapsburg rule and his son Philip the Handsome married into Spain's ruling family in 1496 bringing Castile, Aragon and their Italian possessions under Habsburg control.

In 1521 the vast and scattered domains of the Habsburg's were amicably split between the dynasty's two eldest brothers, Charles V, ruling Spain, the Low Countries, their Italian territories and briefly Portugal, while his brother Ferdinand I was awarded Austria, their German territories, Bohemia and Hungary. The Austrian branch continued their domination of the Holy Roman Imperial crown.

Modern research shows the Habsburg's suffered genetically from inbreeding and in 1700 the Spanish branch of the family came to a dramatic and sudden end when the last Habsburg King, Charles II, died having failed to provide the throne with a male heir. This ignited the War of the Spanish Succession which resulted in the weakening of Spain's power and the end of Habsburg influence in Spain. The last male Austrian emperor died in 1740 leaving the throne to Empress Marie Therese who proved to be one of the empire's greatest monarchs. She reinvigorated the Habsburg line, by marrying a relation, the Duke of Lorraine and technically forming a new dynasty, the House of Habsburg-Lorraine. However the tradition of the Habsburg's survived unchanged.

In 1806 Napoleon dissolved the Holy Roman Empire and seriously reduced the influence of the Habsburg's in their traditional German heartland. At the same time, the empire's Balkan and Central European territories began to require more attention. In 1848 liberal ideas in Europe erupted into Revolution throughout the continent with Hungary a particular hotbed of discontent. In 1849 Austria required Russian help to suppress the revolt. In 1866 Austria was defeated by Bismarck's Prussia and forced to relinquish its last domains in Germany and in 1867 Austria permanently agreed to share power with Hungary as the Austro-Hungarian Empire, its full title actually being 'The Kingdoms and Lands Represented in the Imperial Council and the Lands of the Crown of St Stephen'.

The Dual Monarchy of Austria-Hungary was a veritable family of 11 officially recognized nationalities kept in union by the Habsburg Monarch who functioned as Emperor of Austria and King of Hungary simultaneously. The 19th Century was a time of national or ethnic awakening throughout Europe and tensions within the Austro-Hungarian Empire were intense. Poles yearned for a separate and united homeland, Croats demanded autonomy, Serbs conspired to join the Kingdom of Serbia and ethnic Germans were concerned they were losing influence to liberal and non-German forces. As well as the recognised national groups the empire was also home to large populations of Jews, Muslim Bosniaks, Gypsies and numerous other groups including Albanians, Turks, Circassians and Aromanians. The potential for trouble was understood by the authorities who attempted to share power equally with everyone under the unifying and benevolent overlordship of the Empire's grandfatherly figure Emperor Franz Josef.

The Habsburg monarch held great influence within the Catholic Church, even using its power to veto the election of the Papal Father in the conclave of 1903. The Monarch also held rights to protect Catholics in the non-Catholic states of Serbia, Montenegro and Albania. In 1914 the Catholic Church signed a Concordat (agreement) with Serbia which ended the Hapsburgs rights over Catholics in Serbia. This provoked deep concerns within Austria-Hungary about their empire's declining power and the intensions of Serbia. A few days later, the heir to the Imperial and Royal thrones, Archduke Francis Ferdinand and his wife were assassinated by a Serbian terrorist group, the Black Hand, while touring the Bosnian capital, Sarajevo. Austria-Hungary issued an ultimatum to Serbia which they could not agree to and exactly one month later on 28th July 1914 war erupted, triggering World War One.

Emperor Franz Josef had been reluctant to embark on war. His multinational Army performed poorly in battle, their German allies complaining their alliance with Austria-Hungary was 'like being shackled to a corpse'. In 1916 after 68 years as Monarch the Empire's grandfatherly ruler died singing the National Anthem and his grand nephew Karl (Charles) was proclaimed Emperor. Karl attempted to negotiate peace with France but the Allies were not willing to stop the bloodshed. He was the only world leader to ban the use of poisonous gas during the war. In October 1918 Austria-Hungary surrendered and the empire broke up; Austria becoming a republic and Hungary even temporarily fell to the Bolsheviks in 1919. Traditional forces regained Hungary restoring the Monarchy and in 1921 Karl twice attempted to reoccupy his throne, which officially remained 'vacant' until 1946. In 1922 Karl died in exile in Madeira. In 2004 the Catholic Church honoured the peace loving, devout Karl and Pope John Paul II hailed his 'heroic virtues'.

Upon Karl's early death the mantle of the Hapsburg Dynasty fell to his 9 year old son, Crown Prince Otto, who finally relinquished all Imperial claims in 1961. Otto von Habsburg served as a Member of the European Union Parliament from 1979-99 where his most remarkable achievement was punching the Northern Ireland's Rev Ian Paisley for calling the Pope an Anti-Christ. On 4 July 2011 Crown Prince Otto von Hapsburg died at the age of 98. Had he been crowned he would have been history's longest ruling monarch, serving since 1922. He is buried in Vienna while his heart is separately interned in Budapest. His son Karl von Hapsburg (born 1961) now heads the Dynasty.