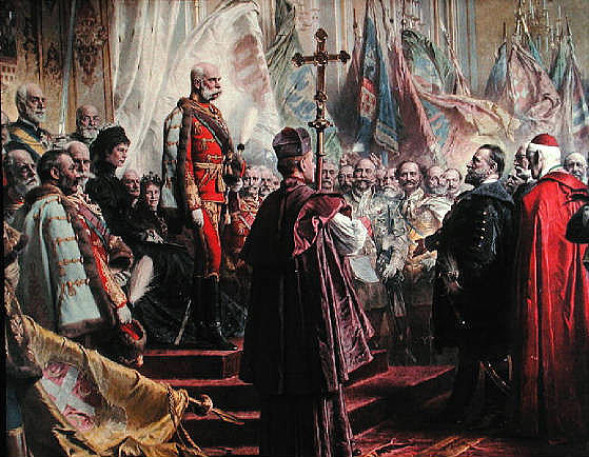 Franz Joseph ruled from 1848 to 1916. With such a long reign, many coins were struck with his likeness, some as a young man, some older. Further, there are several denominations of silver and gold coins with Franz Joseph's likeness, and they all have the double-headed imperial eagle on the reverse. 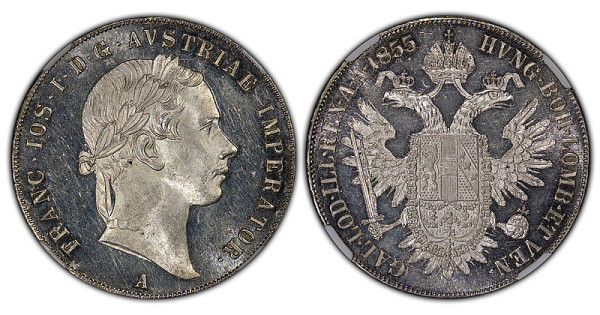 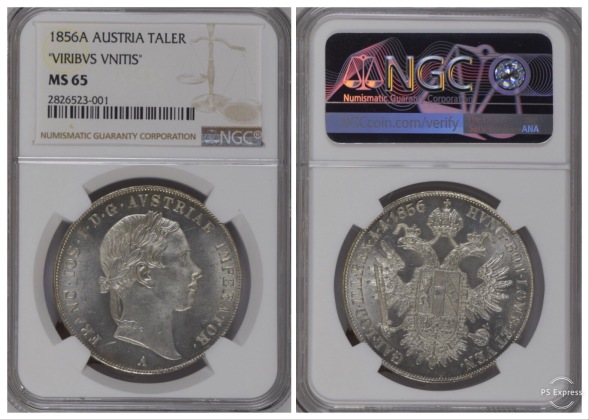 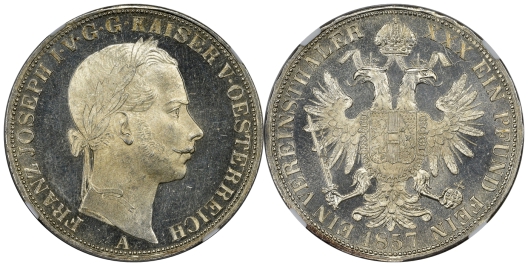 1857. Austria, Empire. Franz Joseph I. Emperor, 1848-1916. 1857 Southern Railway 2 Thaler. Mint Place: Vienna (A). Engraver: Carl Radnitzky. Silver. 41mm. DAV-20. Herinek: 821. KM-2246.1. Variety. Mintage: 1,644. On 27 July 1857, the Austrian railway company k.k. Südliche Staatsbahn (SStB) completed the construction of Trieste's first railway facilities. On the same day, in the presence of the Austrian Emperor Franz Joseph I, the new terminal station at Trieste, including its relatively modest original passenger building designed by the engineer Carl Ritter von Ghega was officially opened. The inclusion of Trieste in the main axis of the Austrian Südbahn generated an economic upswing in the largest and most important port city ruled by the Austrian monarchy, and strengthened its position in the Habsburg Empire. The present day rail network of the city of Trieste is based, for the most part, upon railway lines constructed by the former Austrian Empire.

Scarce type with a very low total mintage of which a few have survived in this select premium quality. Iridescent piece with outstanding eye appeal and undergraded. PCGS MS-64. 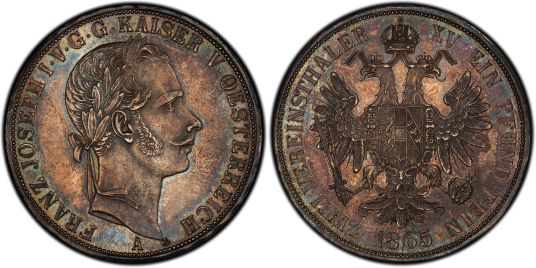 1865-A. Austria. Emperor of Austria Franz Joseph (1848-1916) 2 Thaler. Vienna mint. DAV-23. KM-2249. Mintage: 7,425. Obv: Laureate head right. Rev: Crowned imperial double eagle. With definite eye appeal, this immense multiple Taler features the laureate head of Franz Joseph and the representative crowned, double-headed eagle upon the reverse. The surfaces are beautifully styled, with bold central detail heightened by the collection of charcoal color at the edges, and only mild handling observed throughout the fields. Rarely offered at the Mint State level, and an exciting opportunity as such. PCGS MS-62. 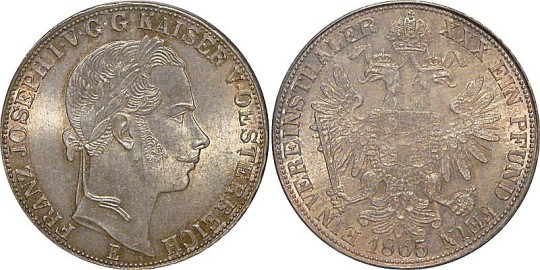 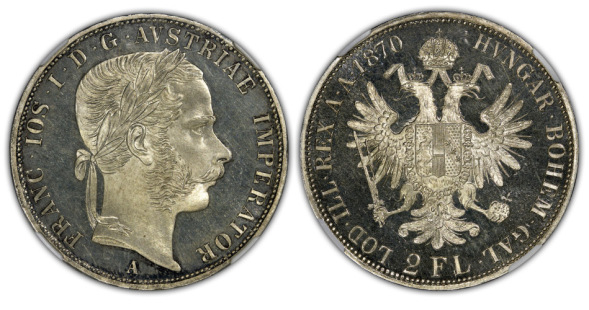 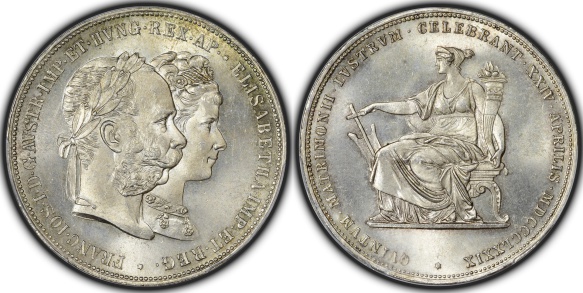 The rapid development of towns and town society in the second half of 19th century brought upon a rich social life. Its essential part were various fellowships and associations. Shooting associations count to the most prestigious ones and used to group together people interested in sport shooting. The shooting associations were organized in country shooting unions. An essential social event in 1879 was the foundation of Austrian state shooting club in Vienna. The prestige of annual union gatherings, so-called shootings, was directly derived from the social status of attendees and the shooters' reputation. Valuable rewards were prepared for the attendees, just as high financial rewards for winners in shooting disciplines. Besides tea and coffee sets and golden wrist watches, medals in various sizes and from various metals were also popular commemoration objects. The choice of size and material was to indicate the social prestige and various sport achievements of the attendees. The number of minted medals usually corresponded with the number of awarded persons, the rest of medals was used as giveaways to important persons and institutions. For instance, the last three large silver medals from Olomouc shooting of 1884 the union's board gave off to the union treasury chamber, the historical museum in Olomouc and the emperor. Shooting medals immediately became popular collectional objects for their rarity and have stayed until the present time. 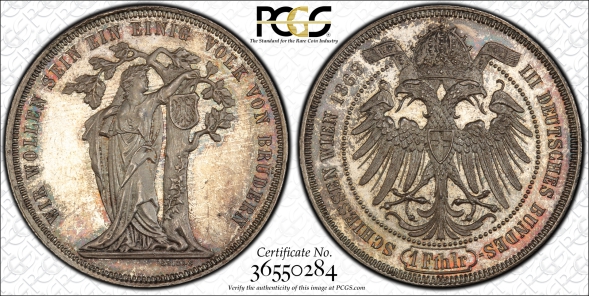 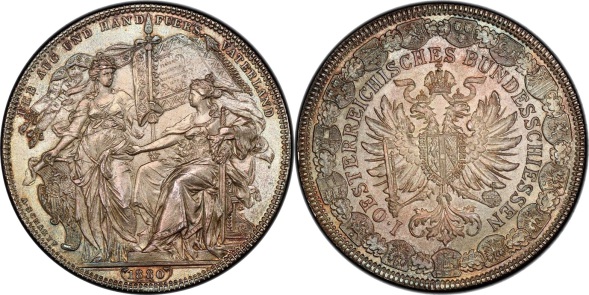 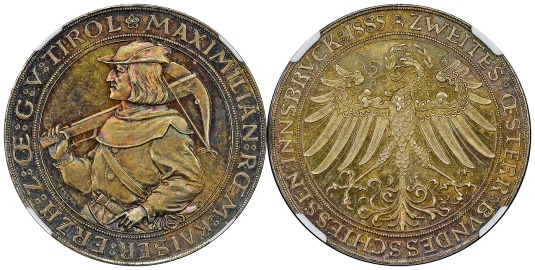 In 1896, the Hungarians commemorated the thousandth anniversary of the arrival of hungarian tribes to the Carpathian (Pannonian) basin. To this millenium belongs (besides monumental celebrations of the Hungarian nation) a group of some exceptional and very heterogeneous commemoration medals. These strikes immitate some notable historical strikes (e.g. Denar of St. Stephen, Andrew II., Groschen or Goldgulden of Charles Robert or Thaler of St. George or Ferdinand I., occurring as a golden 9 Ducat struck as well). 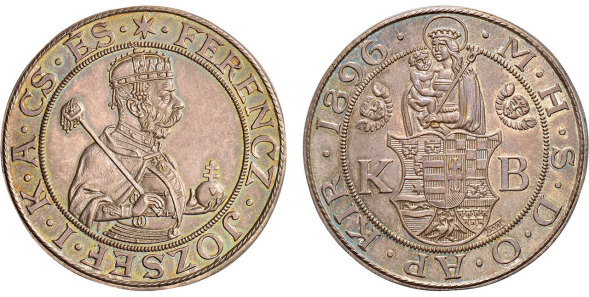 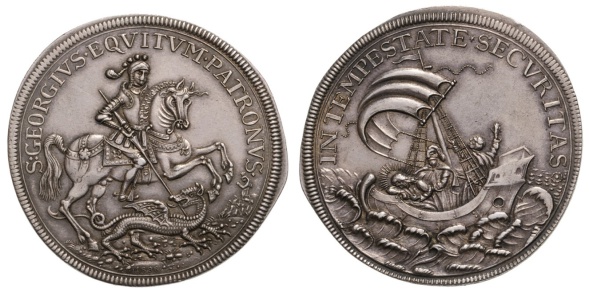 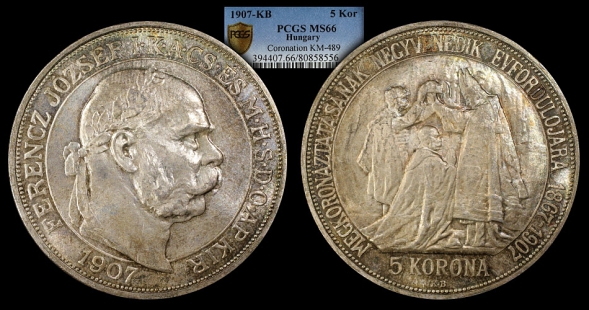