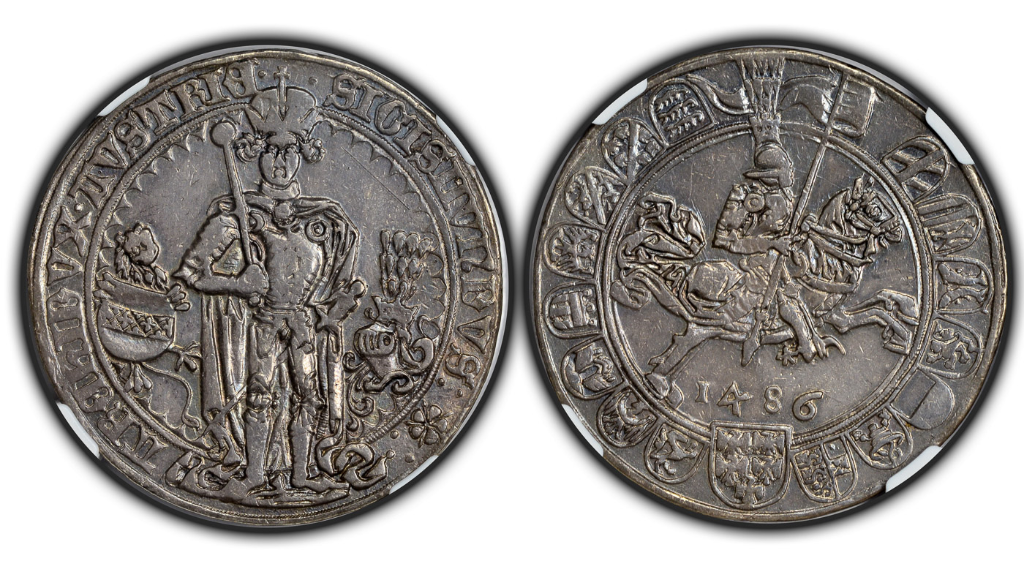 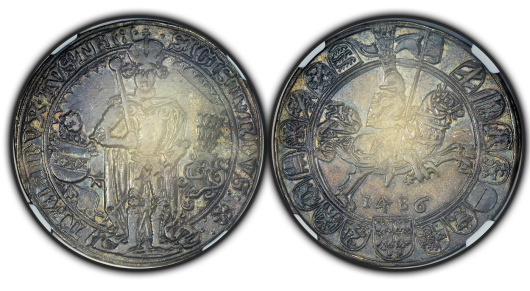 1486. AUSTRIA. Tyrol. Guldiner (Guldengroschen). Sigismund (1439-90). Dav-8087; Levinson IV-49a; Frey-274. First of the large silver dated talers originating from central Europe, the type is unanimously considered the father of the Taler coinage that soon followed all through central Europe. The type is relatively rare with perhaps no more than 160 known specimens most of which have been mounted or tooled. Struck from silver mined using newer technology at what had been considered depleted deposits in Tyrol. A magnificent example of the type with glossy anthracite colored tone and a cornucopia of remaining detail for the assigned grade. The Count's effigy is clear and retains much of the facial details, with a reverse that is simply breath-taking, with every shield in the periphery fully struck and well defined. The knight's banner can clearly be seen flapping in the air above his charging horse. Everything about the coin, from the iconography to the state of preservation, combine to create a coin of the highest desirability. An opportunity that should not be missed for any advanced collector of Austrian Talers or related material. NGC EF-40.

In the later years of the 1470s and early 1480s Sigismund issued a decree that instituted a radical coinage reformation that eventually led up to the creation of the world's first really large and heavy silver coin in nearly a millennium, the guldengroschen, which the Habsburgs in Bohemia developed later into the thaler. This coin was the ancestor of many of the major European coin denominations to come later and also of the US dollar. Using new mining methods and technology, the largely quiescent silver mines in Tirol were brought back into production and soon numerous surrounding states were re-opening old mines and minting similar coins. This production of large coinage exploded as silver from Spain's colonies in the Americas flooded the European economy. It is from these reforms in part that Sigismund acquired the nickname of der Münzreiche, or "rich in coin".

The Guldengroschen was a large silver coin originally minted in Tirol in 1486. The Guldengroschen's name comes from the fact that it has an equivalent denomination value in silver relative to that of the goldgulden (60 kreuzer). In the latter years of the 1470s and early years of the 1480s Sigismund of Austria issued decrees that reformed the poor state of his region's coinage by improving the silver fineness back to a level not seen in centuries (.937 pure) and created denominations larger than the ubiquitous, but fairly low valued Groschen of 4 to 6 Kreuzer that were in use. In 1484, small numbers of "half guldengroschens" valued at 30 kreuzer were issued. This was a revolutionary leap in denomination from the smaller pieces, and surpassed even the large testones of Italy which were the highest weight coins in use. Finally in 1486 the full sized guldengroschen of 60 kreuzers was put into circulation and it was soon nicknamed "guldiner".

For a long time thereafter such coins were also called "unciales" because their actual silver weight was very nearly one ounce. As large quantities of silver became available other states began issuing guldiners of their own. Bern, in modern day Switzerland was one of the earliest to follow Tirol by issuing its guldiners in 1493. In 1500, Saxony's mint at Annaberg took minting of guldiners to new heights and the economies of central Europe welcomed these large new coins.

The original Tiroler guldiner was designed so that eight coins minted would weigh in pure silver at one Tiroler Mark. This was fine for Tirol, but much of Europe was accustomed to measuring by the more widely used Cologne mark. The penultimate development of the guldiner occurred in 1518 when the Joachimsthal mint in Habsburg-controlled Bohemia slightly altered the weight of the coin from 31.93 g down to 29.20 g. This made it possible to mint nine guldiners to have the silver weight equivalent of one Cologne Mark, rather than the eight in Tirol. This new coin was known as the Joachimsthaler (Joachimsthal guldiner), but like the guldengroschen being contracted to guldiner, the joachimsthaler became known simply as the thaler. This new coin was an instant success and was the great grandfather of many other similar weight coins like the daalder, dollar, tolar, tallero, etc.