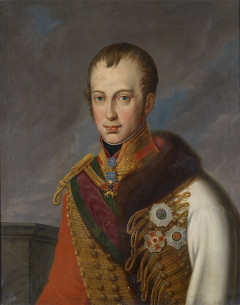 Ferdinand was the eldest son of the Holy Roman emperor Francis II (later Francis I of Austria) and Maria Theresa of Naples-Sicily. Despite Ferdinand’s feeblemindedness and epilepsy, Francis, seeking to protect the principles of succession to the monarchy, insisted that Ferdinand be his heir. Ferdinand was crowned king of Hungary in 1830. On March 2, 1835, he succeeded to the throne of Austria. Because of the emperor’s limited abilities, government affairs were controlled by a body of counselors, known as the “state conference,” in which the decisive influence was exercised by the chancellor Klemens, Prince von Metternich. In 1836 Ferdinand became the last Habsburg to be crowned king of Bohemia, and in 1838 he was crowned king of Lombardy and Venetia. During the Revolution of 1848 most of the insurgents’ hostility was directed not against Ferdinand but against his counselors, who had rigidly refused any reforms. Nevertheless, Ferdinand abdicated in favour of his nephew, Francis Joseph, in Olmütz on Dec. 2, 1848.