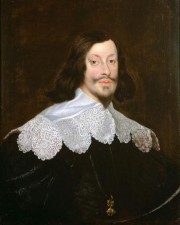 Ferdinand III, (born July 13, 1608, Graz, Inner Austria—died April 2, 1657, Vienna), Holy Roman emperor who headed the so-called peace party at the Habsburg imperial court during the Thirty Years' War and ended that war in 1648 with the Peace of Westphalia.

The eldest son of the emperor Ferdinand II and Maria Anna of Bavaria, the energetic and able Ferdinand took part in ministerial councils and affairs of state from 1626. Archduke of Austria from 1621, he was crowned king of Hungary in 1625 and of Bohemia in 1627. Denied command of the imperial armies by Generalissimo Albrecht von Wallenstein, he took part in the conspiracy against the generalissimo and was partly responsible for his death in 1634. Thereafter, Ferdinand nominally commanded the Habsburg armies and in 1634 captured Regensburg and defeated the Swedes at the first Battle of Nördlingen in the same year. As leader of the peace party at the Austrian court, he encouraged negotiations leading to the Peace of Prague (May 1635), by which the emperor Ferdinand II tacitly abandoned his centralist and absolutist plans and restored the status quo of 1627.

Elected king of the Romans (heir to the imperial throne) in 1636, Ferdinand became emperor on his father's death the next year. Although he refused to allow religious freedom in his own domains and would not reinstate dispossessed Protestant nobility, he did not hesitate to compromise with Europe's Protestant powers and agreed to the Peace of Westphalia, which ended 30 years of religious strife in central Europe and granted greater freedoms for Protestantism in Hungary. In internal affairs Ferdinand's creation of a standing army and his reform of the imperial council attest to his administrative ability. On his death his second son, Leopold I, succeeded him as emperor.