Following the failure of Emperor Joseph I and Emperor Charles VI to produce a son and heir, the Pragmatic Sanction of 1713 left the throne to the latter's yet unborn daughter, Maria Theresa. In 1736 Emperor Charles arranged her marriage to Francis of Lorraine who agreed to exchange his hereditary lands for the Grand Duchy of Tuscany (as well as Duchy of Teschen from the Emperor).

At Charles's death in 1740 the Habsburg lands passed to Maria Theresa and Francis, who was later elected Holy Roman Emperor as Francis I. The Habsburg-Lorraine nuptials and dynastic union precipitated, and survived, the War of the Austrian Succession. Francis and Maria Theresa's daughters Marie Antoinette and Maria Carolina became Queens of France and Naples-Sicily, respectively; while their sons Joseph II and Leopold II succeeded to the imperial title. 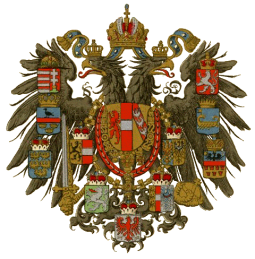 Apart from the core Habsburg dominions, including the triple crowns of Austria, Hungary, and Bohemia, several junior branches of the House of Habsburg-Lorraine reigned in the Italian duchies of Tuscany (until 1860), Parma (until 1847) and Modena (until 1859). Another member of the house, Archduke Maximilian of Austria, was Emperor of Mexico (1863–67).

In 1900, Archduke Franz Ferdinand of Austria (then heir presumptive to the Austro-Hungarian throne) contracted a morganatic marriage with Countess Sophie Chotek.

Their descendants, known as the House of Hohenberg, have been excluded from succession to the Austrian-Hungarian crown, but not that of Lorraine, where morganatic marriage has never been outlawed. Nevertheless, Otto von Habsburg, the eldest grandson of Franz Ferdinand's younger brother, was universally regarded as the current head of the house. It was at Nancy, the former capital of the House of Vaudemont, that the crown prince married Princess Regina of Saxe-Meiningen in 1951.