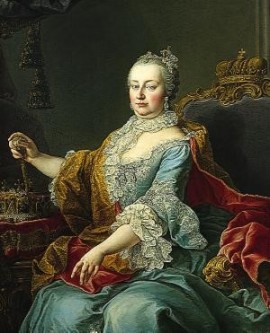 Maria Theresa, German Maria Theresia (born May 13, 1717, Vienna—died Nov. 29, 1780, Vienna), archduchess of Austria and queen of Hungary and Bohemia (1740–80), wife and empress of the Holy Roman emperor Francis I (reigned 1745–65), and mother of the Holy Roman emperor Joseph II (reigned 1765–90). Upon her accession, the War of the Austrian Succession (1740–48) erupted, challenging her inheritance of the Habsburg lands. This contest with Prussia was followed by two more, the Seven Years' War (1756–63) and the War of the Bavarian Succession (1778–79), which further checked Austrian power.

Maria Theresa was the eldest daughter of the Holy Roman emperor Charles VI and Elizabeth of Brunswick-Wolfenbüttel. The death of an only son prompted Charles, the only living prince of his line, to promulgate the so-called Pragmatic Sanction, a royal act, eventually recognized by most powers, whereby female issue was entitled to succeed to the domains of the Habsburgs (Since nearly every major European nation coveted some part of the Habsburg domains, their consent to the Pragmatic Sanction must be taken as nothing more than an act of convenience.)

Maria Theresa thus became a pawn on Europe's political chessboard. In 1736 she married Francis Stephen of Lorraine. Because of French objections to the union of Lorraine with the Habsburg lands, Francis Stephen had to exchange his ancestral duchy for the right of succession to the Grand Duchy of Tuscany. The marriage was a love match, and 16 children were born to the couple, of whom 10 survived to adulthood.

Though Francis had not been a faithful husband, Maria Theresa never wavered in her love, and his sudden death in 1765 plunged her into prolonged grief. She emerged from it, her zeal for activity nowise impaired. A new public-debt policy, the settlement of the empty spaces of Hungary, the drafting of a penal code to supplant the tangle of local systems, and a kind of poor law—these were but some of the innovations in which she herself took a hand, with her common sense doing service for the book learning she lacked. In step with the enforced retreat of the church from secular affairs, she came to feel that it was incumbent on the state to control the intellectual life of its subjects. It was she who institutionalized government censorship; on the other hand, it was she, too, who launched plans for compulsory primary education.

Although Maria Theresa pedantically supervised her children's upbringing and education, she was to experience many disappointments in connection with them. Of her sons, only Leopold of Tuscany (later Emperor Leopold II), though difficult as a child, lived up to her hopes. Her special affection belonged to Maria Christina, who was allowed to marry for love and on whom Maria Theresa showered vast gifts of money. Three of her daughters, married off to unprepossessing Bourbons—in Parma, Naples, and France—again and again irritated their mother with their strong will or their follies; to her dying day she bombarded one of these, Queen Marie-Antoinette of France, with practical advice, moral exhortations, and dire warnings of the future.

On Oct. 20, 1740, Charles VI died, and the war of succession he had striven so hard to forestall broke out before the end of the year. Charles left the Habsburg state at the lowest point of its prestige, its coffers empty, its capital beset by unrest. The naive courage with which Maria Theresa assumed her heritage (and made her husband co-regent) astounded Europe's chancelleries. Her refusal to negotiate with Frederick II (later the Great) of Prussia, who had invaded Silesia, her most prosperous province, appalled the senescent councillors of her late father. Her successful appearance before the refractory Hungarian Estates, ending with an appeal for a mass levy of troops, gave her a European reputation for diplomatic skill. When the elector Charles Albert of Bavaria—one of the princes who had joined Frederick in assaulting Habsburg territories—was elected emperor, Maria Theresa was mortified; that dignity, little more than titular by then, had in practice been hereditary in her family for 300 years. Upon the death of Charles Albert (1745), she secured for her husband, Francis, the imperial crown, which the law denied to women.

Realizing the need for a sizable standing army and in order to maintain one, Maria Theresa accepted the plans of Count Friedrich Wilhelm Haugwitz—the first in a succession of remarkable men of intellect she was to draw into her council. In the face of the opposition of many noblemen, she managed to reduce drastically (except in Hungary) the powers of the various dominions' estates, which had held the monarchy's purse strings since time immemorial. In the further process of abolishing tax exemptions held by the great landowners, who dominated those assemblies, she hit on the notion of a "God-pleasing equality." Yet she did not question the justice of the manorial lord's claim on the labour of his hereditary subjects. Only many years later did peasant riots in famine-stricken Bohemia, as well as the reported cruelty of Hungarian magnates, cause her to limit the use of forced labour. "The peasantry must be able to sustain itself as well as pay taxes . . . ," she wrote.

Practical, if not always fiscal, considerations, rather than doctrinaire humanitarianism, guided all of Maria Theresa's reforms. An enlarged central administration—from which the judiciary was separated in 1749—and a repeatedly reorganized treasury required knowledgeable civil servants and judges; and their training was, to her mind, the sole purpose of higher education. She approved drastic changes that her physician, the Dutchman Gerhard van Swieten, carried through at the universities (such as the introduction of textbooks, the linking of the medical school of the University of Vienna with the embryonic public health service, and the sovereign's right to veto the election of deans by the faculties) even as he took them out of the hands of the Jesuits, to whose Society she herself was devoted. (She was the last of the Catholic monarchs to close its establishments.) Deeply pious, strictly observant, and intolerant to the point of bigotry, she was moving, nonetheless, toward subordinating the church to the authority of the state.

Neither the peace of 1745 (by which Austria ceded Silesia to Prussia) nor the peace of 1748 (which ended Maria Theresa's war with the rest of her enemies) ended her efforts to modernize the army. The dazzling ideas of her new chancellor, Wenzel Anton von Kaunitz, fired her determination to recover Silesia, indeed, to destroy Prussia. In a famous "reversal of alliances" (1756) she threw over England, the old ally and "banker" of the Habsburgs, and allied herself with France, their ancient foe. Moreover, she had entered into a treaty with Russia, a newcomer to European rivalries. She paid but scant attention to the global ramifications of the ensuing Seven Years' War. When its end sealed the loss of Silesia and left the monarchy with a mountain of debts, she became a champion of peace. As late as 1779 she single-handedly frustrated another full-scale war with Prussia, risked by her self-opinionated firstborn, Joseph II, who on his father's demise had become co-regent in the Habsburg dominions (and been elected emperor). 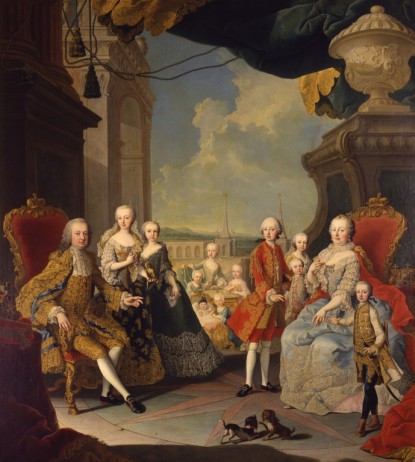 But it was the running conflict with her son Joseph that clouded the years of her widowhood most. His flirting with the “new philosophy” of the Enlightenment frightened her, his admiration of Frederick the Great offended her, and his foreign enterprises filled her with trepidation. There were threats of abdication on both his part and hers. When Joseph, supported by Kaunitz, pressured her into agreeing to share in the (first) partition of Poland in 1772, she loudly bewailed the immorality of the action. And while she had shrugged off ridicule on such occasions as her setting up a public morals squad (the “chastity commission” of popular parlance) or, prude though she was, her enlisting the help of Louis XV’s mistress, Mme de Pompadour, in order to obtain the French alliance, the accusation of “lachrymose hypocrisy” raised in foreign courts during the Polish affair distressed her. Grown enormously stout and in poor health, she spent more and more of her time in suburban Schönbrunn, whose palace owed its reconstruction to her initiative. She was still trying to hold off the approach of the new age. Ironically, her own pragmatic reforms had smoothed the road to the enlightened despotism that was to mark the reign of her son and successor, Joseph II. She died in November 1780.

Maria Theresa was a key figure in the power politics of 18th-century Europe. To the Habsburg monarchy, a dynastic agglomeration of disparate lands, she gave a measure of unity. A princess of engaging naturalness, she was one of the most capable rulers of her house and, according to one historian, “the most human of the Habsburgs.”