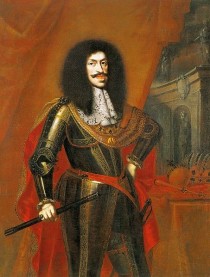 Leopold I,  (born June 9, 1640, Vienna—died May 5, 1705, Vienna), Holy Roman emperor during whose lengthy reign (1658–1705) Austria emerged from a series of struggles with the Turks and the French to become a great European power, in which monarchical absolutism and administrative centralism gained ascendancy.

Leopold, the second son of Ferdinand III’s first marriage, to his cousin Maria Anna, daughter of Philip III of Spain, was destined for the church. He received a careful education by excellent teachers, among whom the cultured count Johann Ferdinand Portia was the leading personality. Made lord high steward by his pupil, Portia retained his influence with Leopold until his death in 1665. From an early age Leopold showed an inclination toward learning. He learned easily and became fluent in Latin, Italian, and Spanish, but he did not like French and later would not have it spoken at court. Besides concerning himself with antiquarian studies, history, literature, natural science, and astronomy, his special interest was music, having inherited the musical talents of his father. The keynote of his personality was a deep devotion, which made him the personification of pietas Austriaca, the loyal Catholic attitude of his house. From his religiosity, however, also derived a fatalistic strain, which had its negative side for a ruling monarch. He rejected all political compromising on denominational questions.

When his elder brother, Ferdinand IV, died quite unexpectedly (July 9, 1654), Leopold suddenly found himself heir apparent to the Austrian Habsburg lands. In 1655 the Lower Austrian estates did homage, and he was elected and crowned king of Hungary, the Bohemian coronation following in 1656. Then, in 1657, his father died, and a new imperial election was due. After long and difficult struggles against the opposition of France, Leopold was elected and crowned in the summer of 1658.

Leopold acquired a claim to the Spanish throne by his first marriage, in 1666, to Margarita Teresa, daughter of Philip IV of Spain; she died in 1673. Leopold’s health was bad, and, when he fell dangerously ill in 1670, everybody expected the Austrian line of the Habsburgs to become extinct. He recovered, however, and in 1673 married Claudia Felicitas from the Tirolian branch of the Austrian Habsburgs. In 1676 the Emperor solemnized his third marriage, with Eleonore of Palatinate–Neuburg; this proved a happy union and produced 10 children, among them the future emperors Joseph I and Charles VI.

With untiring energy and a deep sense of duty, Leopold undertook the unwonted task of government. From the beginning he had to fight wars, first of all against the Turks. In 1683 they appeared before Vienna, and for the second time in its history the city suffered a Turkish siege. Leopold had left the capital with his court to await the outcome at Passau. An imperial army was summoned, and from the time of their repulse at Vienna the Turks were gradually forced into the defensive, especially after the military genius of Prince Eugene of Savoy appeared on the scene in 1696. In the Treaty of Carlowitz (1699), almost the whole of Hungary was freed from Turkish rule.

The Hungarian nobles, however, who were mostly Calvinists, did not want to exchange Turkish rule for a centralized Habsburg government, which threatened to introduce the Counter-Reformation. Their opposition had been a serious problem all the time, and Leopold, who usually showed clemency, took a firm stand for once, refusing to recall the cruel sentences after the so-called Nobles’ Plot. Three of the most prominent Hungarian noblemen were executed, and Hungarian resistance flared up again in the fierce Kuruc risings.

Though Leopold’s policy toward Catholic France was undecided at first, he finally had to agree to a coalition with the Protestant naval powers, Holland and England. In the course of the long struggle with France, the empire scored several military successes; but in the end French diplomacy remained victorious, always dividing the enemy at the decisive moment. The Emperor was accused of a wavering attitude and lack of initiative, and these character traits were indeed partly responsible for the failure of his policies. The war ended in the unfavourable Treaty of Rijswijk (1697), under the terms of which Strasbourg had to be ceded to France, a great discredit to Leopold.

Apart from some contributions from the empire and subsidies from its allies, the financial burden of all these wars had to be borne by Leopold’s hereditary countries, the finances of which were badly organized. During his long reign Leopold found it impossible to arrive at a sound financial basis; indeed, he was careless in these matters and for years suffered the treasury to be mismanaged by Count Sinzendorf.

Emperor Leopold was not always fortunate in the choice of his ministers. There was, for example, Count Eusebius Pötting, with whom he had formed a warm friendship but who was not the right man for the post of ambassador to Madrid. On the other hand, councillors who had convinced the Emperor of their sincerity and honesty found excellent chances for a court career, even if they were middle class, like the Austrian court chancellor Johann Paul Hocher.

Leopold no longer regarded the empire as his primary responsibility; rather, in his view, concern for the power and prestige of the Habsburg dynasty and lands took the first place. From the outset the Spanish succession formed the central aim of his politics. What lay behind this was the idea of the unity of the House of Habsburg, the two lines being considered only as parts of the same entail. At the death (1700) of the childless Charles II of Spain, his throne and the vast Spanish holdings passed by bequest to Philippe, duc d’Anjou, a grandson of Louis XIV of France. There could be no question for Emperor Leopold that the Spanish heritage had to be defended by force of arms. In the middle of the War of the Spanish Succession (1701–14), Leopold died. He was buried in the Habsburg mausoleum of the Capuchins at Vienna.

The Emperor was of medium size, rather slender in his youth but stout in later life. His face was pale, and he had dark hair and the typical Habsburg traits of a strongly developed lower lip and a protruding chin. A Turkish traveller described him as a cultivated man of extreme ugliness.

If the Emperor, who had not been trained for the throne, rarely interfered with the course of events, he, nevertheless, impressed contemporaries with an imperturbability founded in personal piety, which did not fail him even during the worst crises to his long reign. His biographer, the Jesuit Hans Jacob Wagner von Wagenfels (died 1702), quite aptly praises his magnanimity as his most conspicuous character trait. The interest Leopold took in all matters of learning, his gift for music, and his preoccupation with historiography made him a patron of renown and, notwithstanding the military conflicts of the time and his precarious finances, gave enormous impetus to learning and the arts throughout the Austrian countries and especially made Vienna a famous cultural centre. His reign saw the first flourishing of Baroque culture in Austria.

In spite of the Emperor’s great personal simplicity, the sums expended to maintain the imperial court were gigantic. At all occasions the Emperor was anxious to emphasize his imperial dignity; official journeys, such as his coronation journey to Frankfurt in 1658, as well as the numerous pilgrimages he undertook to assure divine assistance against his enemies, were used for ostentation. A special concern of the Emperor was to reshape Vienna into a worthy imperial residence. The Vienna court was famous for its costly theatricals, in which at times the Emperor and Empress also took part. Italian operas and ballets were lavishly staged, often with some additional music composed by Leopold himself. As the Emperor was very fond of hunting, courtly pleasures also included heron hawking and hunting wild boars and stags in the vicinity of the residence. Though Leopold undertook no more extensive journeys after 1693, he enjoyed these regular hunting expeditions until his death.

Leopold I was a devoted book collector and, in the director of the court library, Peter Lambeck, found a helper of great renown. He was known for the encouragement he extended to learning, whereby he tried to secure the services of famous scholars for his court.