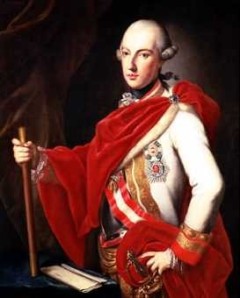 Joseph, the eldest son of Maria Theresa and Francis Stephen of Lorraine (the future emperor Francis I), was strictly and thoroughly educated. When Maria Theresa appointed him to the Council of State, he exhibited unusual intelligence and an intense interest in politics. Joseph’s first marriage in 1760 to the Bourbon princess Isabella of Parma, whom he loved passionately, ended in tragedy when she died of smallpox three years later. In 1765 he married Maria Josepha of Bavaria, who in 1767 also died of smallpox. His inability to make decisions necessarily limited his ambition. After his father died, in 1765, he became emperor, but Maria Theresa made all the important decisions.

After her death in 1780, Joseph tried to finish her work of reform. The educational system had been consolidated throughout the monarchy. For the University of Vienna, no longer under the influence of the church, Joseph tried to find the best scholars and scientists. The judiciary and the executive had already been separated at the top; Joseph extended this process to the lower administrative levels. In 1786 the Universal Code of Civil Law was issued. Under Maria Theresa the physician Gerard van Swieten had organized a public health service, and in Joseph’s time the General Hospital in Vienna was considered one of the best equipped in Europe. The monarchy’s finances were balanced. The reorganization of the army secured Joseph’s position in Europe. He ordered the abolition of serfdom; by the Edict of Toleration he established religious equality before the law, and he granted freedom of the press. The emancipation of the Jews within a short time endowed cultural life with new vitality. The artistic life of Vienna rose to new heights when the Burgtheater became the German National Theater. By transferring the management of the theatres to the actors, Joseph introduced an artistically fruitful concept.

Joseph’s conflict with the Roman Catholic Church, however, posed more difficult problems. He established national training colleges for priests and deprived the bishops of their authority and limited their communications with the Pope. The power of the church was even more affected by the dissolution of more than 700 monasteries not engaged in such useful activities as teaching or hospital work. The 36,000 monks forced to leave their orders were given an annuity or money to return home; those so returning could continue as secular priests. Some measures intended to forestall a relapse into monasticism, such as the foundation of new parishes, bore good results. The Emperor’s impatience in turning the monks out of the monasteries, however, caused many works of art to be destroyed. At the climax of the crisis, Pope Pius VI visited the Emperor in Vienna, but the visit changed nothing; nor did a later journey by Joseph to Rome. Joseph’s passionate zeal to change everything and to force a new form of life on his subjects met with embittered resistance, chiefly in such strongly traditional countries as the Austrian Netherlands and Hungary.

<:section style="DISPLAY: inline" id=toc3760 class="eb-topic-section" print-toc="toc-3760-3760">In foreign policy, Joseph had obtained some success even as co-regent with his mother. When a civil war occurred in Poland under King Stanisław II Poniatowski, the lover of Catherine II the Great of Russia who was completely dependent on Russia, Joseph met with Poland’s third neighbour, King Frederick the Great of Prussia, to plan the partition of Poland, with each neighbour taking a part of the country and the remaining part to be given a last chance at independence. Frederick took what was later West Prussia, Austria took Galicia, and Catherine took as much border territory as she thought necessary. In a later treaty with Turkey, Joseph annexed Bukovina to his country.

To obtain a personal view of the situation in eastern and western Europe, Joseph visited France, where he was enthusiastically received by the intellectual elite, and then also visited Catherine of Russia. The banquets given in his honour in Paris could not conceal the truth from him: France was headed for catastrophe. His Russian visit gave him the impression of a state retarded in its development compared with the West, but the loyalty of its enormous population to Catherine and her nearly unlimited power seemed to make her the best ally for political manoeuvres in Europe.

After his mother’s death, Joseph had involved himself fruitlessly in 1784 in an attempt to force the Dutch to lift their blockade to secure a passage to the sea for the Austrian Netherlands. The Emperor hoped for more success with his unusual plan of exchanging the Austrian Netherlands for Bavaria. The Wittelsbach dynasty had been extinguished in Bavaria, and the heir, the count palatine Charles Joseph, was in favour of moving from Munich to Brussels. But Joseph left Prussia out of his calculations. Frederick protested, and his troops marched into Bohemia. The threat of war ended without a battle being fought, for in 1785 Frederick had formed the Fürstenbund (Princes’ League) against Joseph to prevent the exchange. Deeply disappointed, Joseph now saw his only hope in Catherine. Though he was in bad health, he decided to visit her again; the Austrian Netherlanders and Hungarians, enraged at his reforms, resisted the move. Both publicly and secretly Catherine proposed a complete sharing of power in the east and southeast. Joseph signed an alliance giving her a free hand for her far-reaching plans and the conquest of Constantinople and the Dardanelles and assuring Austria of substantial territorial gains. When Catherine declared war on Turkey sooner than expected, Joseph raised an army of 250,000 men. Yet, despite careful preparations, the organization of this large army was weak. Revolutionary unrest in the Austrian Netherlands and Hungary grew in the belief that preoccupation with the war would prevent the Emperor from taking on the revolutionaries as well. Joseph spent several months with his army; but both his illness and the domestic crisis made progress dangerous, and he had to return to Vienna before a victory could be won. There the Emperor attempted to establish peace in the Austrian Netherlands by delaying negotiations, but he failed in this as he did in Hungary, where his refusal to be crowned had deprived him of a legal foundation for his reign.

In Hungary topographical surveys and the replacing of Latin by German as the official legal language drove the Hungarian gentry into opposition, and in the Austrian Netherlands immigrants who had fled from Holland opened hostilities against the occupation forces, and finally the country declared its independence.

Joseph and his reign have generated much discussion among historians. Generally, he is presented as the representative enlightened absolutist—that is to say, the most typical of those 18th-century monarchs who applied the principles of the philosophical movement known as the Enlightenment to the problems of government and society. In his religious reforms, he endorsed the principles that a person’s beliefs are his own business and that no one should be compelled to worship in ways that violate his conscience. In his social reforms, he sought the greatest good for the greatest number and so tried to alleviate the plight of the peasantry and foster prosperity for all. In his administrative reforms, he tried to rationalize government so that it could perform as effectively and sensibly as possible, and he sought to achieve not only equal treatment for his subjects but equal opportunity as well.

But many scholars dispute these claims. They argue that Joseph fostered freedom of expression only when that expression did not criticize him; when it did, he introduced repression just as harsh as any other monarch of the time. His social and religious reforms were less concerned with creating a just society than with extracting the greatest amount of taxes and the greatest number of military recruits from his people in the most efficient manner possible. Prosperity in his mind was good only because it meant increased revenue for the state. Finally, they contend that his administrative reforms served primarily to level the cultural and historical differences among his crown lands without consideration for the traditions and customs of the people who populated them. The debate among scholars promoting these positions and their variations will continue for some time. It can be said, however, that Joseph’s legacy was profound in the monarchy’s later history. His policies set the tone for church-state relations from his reign onward, and his reforms in serf-lord relations alleviated the worst conditions in the countryside and would be completed by the final abolition of serfdom in 1848. Perhaps the one criticism that will stand in all schools is that Joseph tried to do too much too quickly and so died a deeply disappointed man.