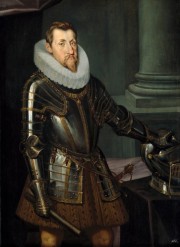 Ferdinand II, (born July 9, 1578, Graz, Styria [now in Austria]—died Feb. 15, 1637, Vienna), Holy Roman emperor (1619–37), archduke of Austria, king of Bohemia (1617–19, 1620–27), and king of Hungary (1618–25). He was the leading champion of the Roman Catholic Counter-Reformation and of absolutist rule during the Thirty Years’ War. Ferdinand was born in Graz, the eldest son of the archduke Charles, the ruler of Inner Austria (Styria, Carinthia, and Carniola), and Maria, a daughter of Albrecht V, duke of Bavaria. From 1590 to 1595 he was educated at the University of Ingolstadt by Jesuits whose aim was to make him a strict, rigidly Catholic ruler.

In 1596 he took over his hereditary lands and, after a pilgrimage to Loreto and Rome, set about suppressing Protestantism by forcing the great majority of his subjects to adopt the Roman Catholic faith. In 1600 he married Maria Anna of Bavaria, who bore him four children. He avoided committing himself in a quarrel between his cousins, the Holy Roman emperor Rudolf II and his brother Matthias, who eventually succeeded Rudolf as emperor. Later Ferdinand secured approval from the Habsburg rulers of Spain to succeed the childless Matthias. In return he promised in a secret treaty (1617) to cede to them Alsace and the imperial fiefs in Italy. In the same year, Ferdinand was recognized by the Bohemian Diet as king of Bohemia and in 1618 was elected king of Hungary. In 1619, however, the largely Protestant diet of Bohemia deposed him, electing Frederick V, elector of the Palatinate, as their king. This was, in effect, the beginning of the Thirty Years’ War. Though elected Holy Roman emperor on Aug. 28, 1619, Ferdinand was able to maintain himself only with support from Spain, Poland, and various German princes. Aided by Maximilian I, duke of Bavaria, his troops annihilated the rebel army on the White Mountain, near Prague, on Nov. 8, 1620. He confiscated the estates of the rebel magnates, reduced the Diet to impotence by a new constituent ordinance (1627), and forcibly catholicized Bohemia. The Protestants of Upper and Lower Austria were subjected to compulsory conversion. During the first decade of the Thirty Years’ War, Ferdinand strengthened his position by transferring the Palatinate’s electoral office to Maximilian of Bavaria.

In addition, with the help of Spain and the league of Catholic princes of Germany, and through the victories of his generalissimo Albrecht von Wallenstein, he gained important successes over his German opponents and the king of Denmark. Until then the war largely had been confined to Germany, but Swedish and, later on, French intervention turned it into a European conflict. Ferdinand’s Edict of Restitution (1629), which forced Protestants to return to the Roman Catholic church all property seized since 1552, revealed to the German princes the threat of imperial absolutism. Their opposition forced Ferdinand in 1630 to dismiss Wallenstein, the mainstay of his power. The victorious advance of the Swedish army, however, made the emperor recall Wallenstein. Eventually, for reasons of state, Ferdinand reluctantly gave his consent to a second dismissal and the assassination of Wallenstein, who had treacherously entered into negotiations with the enemy (1634). After his victory over the Swedes (September 1634) at Nördlingen, Ferdinand reached a compromise with the Protestant princes in the Peace of Prague (1635) and, in 1636, succeeded in having his son Ferdinand elected king of the Romans (successor-designate to the emperor).

Ferdinand II, who had been married to his second wife, Eleonora Gonzaga of Mantua, since 1622, died in Vienna in 1637. In the prime of his life Ferdinand was described as a blue-eyed, somewhat corpulent, middle-sized man who wore Spanish court dress. A good-natured, benevolent, affable monarch, he was imbued with the belief in the splendour of the imperial crown and the greatness of his dynasty. Besides German he spoke Italian, French, and Spanish, was fond of music, and liked reading religious books, but his passion was hunting. Although he kept a frugal court, he was a bad financier who too generously gave away the greatest part of confiscated estates to his faithful followers. A very pious Catholic, he especially favoured the Jesuits. Yet, basing his policies chiefly on religious principles, he suffered from discrepancies between his religious goals and the maxims of a modern raison d’état. An indecisive man, he depended much on the influence of his counselors and his Jesuit confessors. Yet in the face of the shifting fortunes of war, he showed much steadfastness, although he often lacked political agility.

A person of moderate talents and willpower, he nevertheless exerted a strong influence on the events of his time by his strict and uncompromising religious policy. By promoting the Counter-Reformation, Ferdinand II set the course of Austrian Habsburg policy for the next century. By creating an independent Austrian court chancellery and by establishing in his will the principles of Austria’s indivisibility and of primogeniture in his family, he made an essential contribution to the country’s national integration. Yet by maintaining the country’s historical provinces and estates, after their subjugation, he preserved the principle of federalism in Austria. Ferdinand’s Roman Catholic contemporaries considered him a saintlike monarch; his Protestant opponents feared him as a tyrant. Roman Catholic historiography of the 19th century assigned him too high a place, while liberal historians were likely to underestimate his importance. Modern historians tend to view Ferdinand’s religious policy as determined by his time, to acknowledge his importance in molding Austria’s provinces into an integral whole, and to see in his imperial policy an attempt at creating a Roman Catholic German state, however inconsistently carried out.