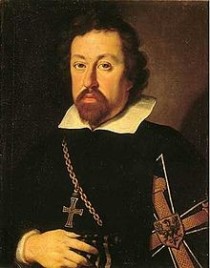 Maximilian III of Austria, also known as Maximilian the Grand Master of the Teutonic Knights (12 October 1558 – 2 November 1618) was the Archduke of Further Austria from 1612 until his death.

From 1585 Maximilian became the Grandmaster of the Teutonic Order; thanks to this he was known by the epithet der Deutschmeister ("the German Master") for much of his later life.

In 1587 Maximilian stood as a candidate for the throne of Polish-Lithuanian commonwealth, following the death of the previous king, Stefan Batory. A portion of the Polish nobility elected Maximilian king, but, as a result of the rather chaotic nature of the election process, another candidate, Sigismund III Vasa, prince of Sweden, grandson of Sigismund I the Old, was also elected. Maximilian attempted to resolve the dispute by bringing a military force to Poland – thereby starting the war of the Polish Succession. His cause had considerable support in Poland, but fewer Poles flocked to his army than to that of his rival. After a failed attempt to storm Kraków in late 1587, he was defeated in January 1588, at the Battle of Byczyna by the supporters of Sigismund III (who had since been formally crowned), under the command of Polish hetman Jan Zamojski.

Maximilian was taken captive at the battle and was only released after the intervention of Pope Sixtus V. In 1589, he formally renounced his claim to the Polish crown. The inactivity of his brother, the emperor Rudolf II, Holy Roman Emperor in this matter contributed to Rudolf's poor reputation.

From 1593 to 1595 Maximilian as served regent for his young cousin, Ferdinand, Archduke of Inner Austria. In 1595 he succeeded their uncle Ferdinand II, Archduke of Further Austria in his territories, including Tyrol, where he proved to be a solid proponent of the Counter-Reformation. He also worked to depose Melchior Khlesl, and to ensure that Archduke Ferdinand of Inner Austria, his former charge, succeeded as Holy Roman Emperor.

Today, Maximilian is perhaps best remembered for his baroque archducal hat, exhibited in the treasury of the monastery of Klosterneuburg and was used for ceremonial purposes as late as 1835.

He died at Vienna in 1618, and is buried in St. Jakobskirche, Innsbruck.