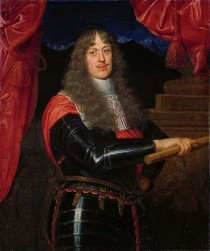 Sigismund Francis, Archduke of Further Austria (27 November 1630 – 25 June 1665) was the ruler of Further Austria including Tyrol from 1662 to 1665. He was born at Innsbruck, the second son of Leopold V, Archduke of Austria and Claudia de' Medici. He was appointed as bishop of Augsburg in 1646. In 1653, he became bishop of Gurk and in 1659 bishop of Trent. He was never ordained as a priest or consecrated as a bishop.

After the death of his brother Archduke Ferdinand Charles, he became Archduke of Further Austria. He was more able than his brother and could have made him a good ruler, but with his early death in 1665 the younger Tyrolean line of the Habsburg house ended. Leopold I, Holy Roman Emperor, who as the heir male succeeded Sigismund Francis, took direct control over the government of Further Austria and Tyrol.

He married Hedwig of the Palatinate-Sulzbach on 3 June 1665 and died in Innsbruck twelve days later.