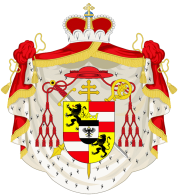 The Prince-Archbishopric of Salzburg (German: Fürsterzbistum Salzburg) was an ecclesiastical principality and state of the Holy Roman Empire. It comprised the secular territory ruled by the archbishops of Salzburg, as distinguished from the much larger Catholic diocese founded in 739 by Saint Boniface in the German stem duchy of Bavaria. The capital of the archbishopric was Salzburg, the former Roman city of Iuvavum.

From the late 13th century onwards, the archbishops gradually reached the status of Imperial immediacy and independence from the Bavarian dukes. Salzburg remained an ecclesiastical principality until its secularisation to the short-lived Electorate of Salzburg (later Duchy of Salzburg) in 1803.

Members of the Bavarian Circle from 1500, the prince-archbishops bore the title of Primas Germaniae, though they never obtained electoral dignity; actually of the six German prince-archbishoprics, Magdeburg, Bremen and Salzburg got nothing from the Golden Bull of 1356. The last prince-archbishop exercising secular authority was Count Hieronymus von Colloredo, an early patron of Salzburg native Wolfgang Amadeus Mozart.