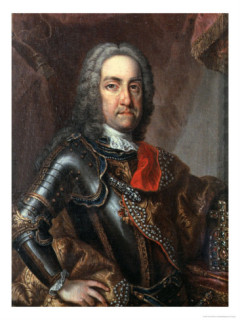 Charles VI, (born Oct. 1, 1685, Vienna, Austria—died Oct. 20, 1740, Vienna), Holy Roman emperor from 1711 and, as Charles III, archduke of Austria and king of Hungary. As pretender to the throne of Spain (as Charles III), he attempted unsuccessfully to reestablish the global empire of his 16th-century ancestor Charles V. He was the author of the Pragmatic Sanction, intended to enable his daughter Maria Theresa to succeed him after the extinction of the direct male line of the House of Habsburg.

The second son of the emperor Leopold I, Charles was a claimant to the Spanish throne when it became vacant on the death of Charles II in 1700. After the outbreak of the War of the Spanish Succession (1701), most of Germany, as well as England, the United Provinces of the Netherlands, and Portugal, recognized Charles. From 1704 to 1711 he attempted to impose his rule but succeeded only in Catalonia. On the death of his elder brother, the emperor Joseph I, in 1711, he inherited all the Austrian territories. Thereupon his allies, unwilling to tolerate a reestablishment of the empire of Charles V, abandoned him and recognized Philip V of Bourbon as king of Spain by the Treaty of Utrecht (1713). Charles, who had been elected Holy Roman emperor in 1711, was forced to leave Spain but continued the war against France until 1714, when, by the Treaty of Rastatt, he gained territories in Italy in partial compensation for the loss of Spain. His Spanish advisers, however, continued to exercise great influence for a number of years. After the return of peace in the West, he conducted a highly successful war against the Ottoman Empire (1716–18), which resulted in great gains in Hungary and Serbia. He further strengthened his empire by founding the lucrative Ostend Company (1722–31), which was finally abandoned under English and Dutch pressure, and he expanded the port of Trieste.

Toward the end of his reign Austria's fortunes declined. Charles lost the War of the Polish Succession (1733–38), and a new conflict with Turkey (1736–39) resulted in the loss of most southeastern territories gained in 1718.

Charles's chief concern at this time was, however, the regulation of the Habsburg succession. As early as 1713 he had promulgated the Pragmatic Sanction, whereby Austria's lands were to pass undivided to his female heirs in the absence of male progeny. As his only son died early, he bequeathed his inheritance to his eldest daughter, Maria Theresa. Fighting strenuously to wrest agreement from the European powers, he seemed at the time of his death to have accomplished his purpose. But his expectation proved illusory: Maria Theresa was forced to fight several wars before she could establish herself securely as her father's heiress.