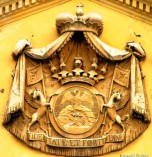 This old Hungarian family, originating from Kovagoors, were made hereditary counts of Nemet-Ujvar (Gussing). A branch of the family was notable in Croatia as well, producing several Viceroys of Croatia in the 16th, 17th and 18th century. The Batthyány family can trace its roots to the founding of Hungary in 896 AD by Árpád. In 1398 Miklós Kővágó-Örs married Katalin Battyány. King Sigismund gave Miklós the region around the town of Battyán (now called Szabadbattyán) and he took the name Batthyány ("from Battyán").

The family were first mentioned in documents in 1398 and had their ancestral seat in Güssing in the Austrian region Burgenland since 1522. In 1570, Boldizsár Batthyány transformed the seat of the family, Güssing, into the center of Protestantism in the region. His descendant Ádám Batthyány (1610–1659), however, was Catholic and founded a Franciscan monastery in Güssing. Lajos Batthyány became the first Prime Minister of Hungary during the Hungarian Revolution of 1848 and was executed in Pest in 1849. After 1945 the Batthyány family's property was largely expropriated in Hungary and other countries under Communist rule, although they retained their property in Austria.

The members of this family bear the title count or countess respectively prince or princess. Count Karl Joseph, in 1764, after fifty years of distinguished service, was granted the title of prince of the empire and the coinage right. The name Strattmann on the coins of his great nephew Ludwig came from his grandmother's side. 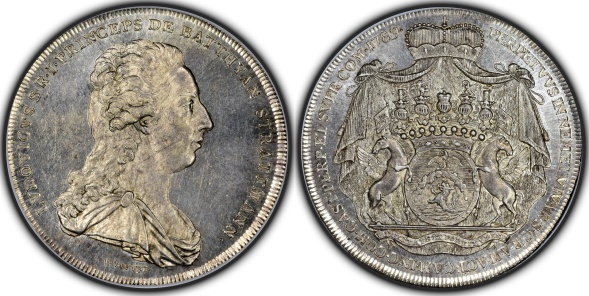 1789. Austria. Noble House of Batthyány. Ludwig Batthyány-Strattmann (1788-1806) Half Convention Taler. Vienna Mint. Holzmair 18. KM-10. Uncommon piece, especially in such high grade. This has PL all over it and was conservatively graded. Probably the finest of this type. NGC MS-64.