Baron Edmond Benjamin James de Rothschild (1845-1934) was a French member of the Rothschild banking family, a philanthropist and Zionist, a strong supporter of the Jewish settlement in the Land of Israel during the first Aliyah.

The first settlements, Rishon Le'Zion, Rosh Pinah, Zichron Ya'akov, Yesod Ha'Ma'ala and Petach Tikvah among them, experienced great financial difficulties. After being asked by various bodies in Israel and around the word, Baron Rothschild agreed to support the colonies by means of the supervision of his administrators. 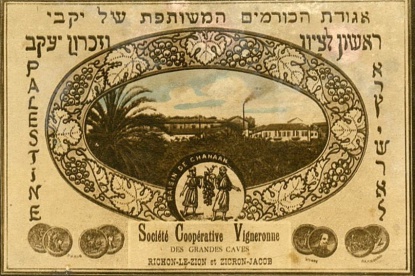 Baron Rothschild was involved in the life of the Zichron Ya'akov colony since 1883, when it was founded by Jewish immigrants from Romania. Among his many enterprises there, he opened a winery, the second in size in the Land of Israel. In 1900, the management of the colony was transferred to the J.C.A. Company (A Jewish settlement company); yet in practice, it was continued to me managed and funded by the Baron.

The Baron's representative, Mr. Yehuda Wormser, suggested that a series of local tokens would be issued and used as money substitures only in Zichron Ya'acov as the Baron's paper tokens were not honored outside of the colony, and the colony buyers needed small change, which was constantly lacking during the Ottoman rule. The issuance of such tokens intended to overcome the shortage of coins, and the dependency on the money changers to whom you had to go in order to make small change, at a high commission.

The brass tokens of Zichron Ya'akov were therefore he first truly Jewish coins o be sruck since the Bar-Kochba coinage of 1750 years earlier. While the tokens were mostly used by the settlers, they gradually spread their use to Arabs living in adjacent villages who traded with the Jews as well as for buying products in Jaffa and Haifa. They were minted in Paris in spring 1885, three years after the foundation of Zichron Ya'akov. The brass tokens are part of a rare group of tokens called the "Zichron Ya'akov Tokens".  The brass tokens were distinct; on one of their sides the words "Zichron Jacob" were impressed and on the other, the figures of 1/4, 1/2 and 1, yet without any mention of the actual denomination out of concern to avoid conflct with the Turks. The tokens were later withdrawn from cirulation as illegal tender. The tokens are considered very rare, and 30,000 gold francs were used to purchase the tokens by the House of Rothchild in Paris, indicating that a relatively large number had been issued - how many were minted, no one remembers. How many exist today is also a mystery.

The denomination has not been fully ascertained although they have been called a piaster. The Baron himself vouched for the tokens and linked the value of the token to the value of a small Turkish coin called "Metlik". The Zichron Ya'akov tokens affected the status of the colony as an independent economic territory with its own coins.

The Ottoman rule, however, vetoed their use and confiscated all of them. All went well with the token use until Ali-Beg, the recently appoined Turkish mudir (sub-district officer) came from Caesarea on inpection to the Jewish settlement. As he walked about the colony inent on discovering any recen unlicensed building acivity which would enable him to blackmail the Jewish settlers, he came across an Arab who was counting his money and spotted some strange coins among his cash. Upon investigation he found it to be a local issue of the Jews, which the Arab had received from a Jewish shop keeper. Wasing no time, he entered the shop and asked the daughter of the shopkeeper about it. She avoided a direct answer which made him all the more furious and so he shouted that the Jews were striking coins of their own, thus betraying the Sultan. The settlers physically attacked Ali-Beg who confronted the girl. Ali-Beg  went straight away to the district officer in Haifa and charged the Jews of Zichron Ya'akov wih a twofold crime - issuing Jewish coins which was illegal and attacking a government official performing his duty. Yehuda Wormser was sent to speak to the Ottoman authorities and agreed to have the tokens annulled and have all charges against the settlers dismissed. Therefore, only few dozens of hidden tokens remained.

The scarcity of these tokens which circulated in abundance in the llate 19th century, is high, and these are highly sought after by any serious collector of Jewish coins and tokens.

Three brass tokens, for use by the settlers of "Zichron Ya'akov". Noted on one side is their value surrounded by the inscription "Zichron Jacob" and on the second side "Zichron Ya'akov" in Hebrew letters. The tokens have the value of 1, ½ and ¼ (undecided if piaster or metlik). Tokens of other values were not minted. 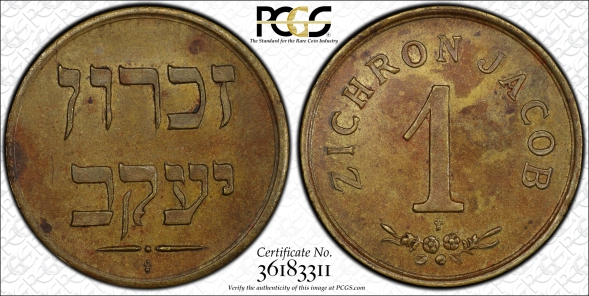 Ottoman Palestine, Zichron Y'aakov, after 1885. Brass 1 piastre (27mm, 4.5gr), Haffner-CC.17A. Obv: Settlement name in Hebrew. Rev: Name in English with denomination of 1 Piastre. Token was struck in Paris in 1885, for use as small change in this settlement, and also used as small change in Jaffa, Haifa and in the nearby Arab settlements due to the lack of Ottoman copper coins. PCGS AU-58.

Ottoman Palestine, Zichron Y'aakov, after 1885. Brass 1 piastre (27mm, 4.5gr), Haffner-CC.17A. Back Tail Variety (on the "1"). Obv: Settlement name in Hebrew. Rev: Name in English with denomination of 1 Piastre. Token was struck in Paris in 1885, for use as small change in this settlement, and also used as small change in Jaffa, Haifa and in the nearby Arab settlements due to the lack of Ottoman copper coins. EF. 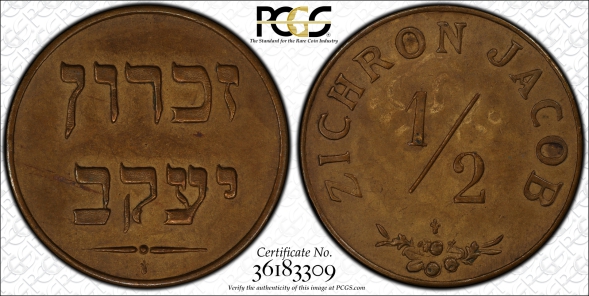 Ottoman Palestine, Zichron Y'aakov, after 1885. Brass 1/2 piastre (23mm, 3.3gr), Haffner-CC.17B. Obv: Settlement name in Hebrew. Rev: Name in English with denomination of 1/2 Piastre. Token was struck in Paris in 1885, for use as small change in this settlement, and also used as small change in Jaffa, Haifa and in the nearby Arab settlements due to the lack of Ottoman copper coins. PCGS AU-55.