1900. Hejaz Railway medal. 30mm, pierced. Silver. The Ottoman Empire. 30mm, pierced. Obv: A circular medal depicting within a laurel wreath tied at the base, a steam locomotive of a 2-6-0 configuration and commonly used on the railway. The locomotive is facing left. Above the locomotive is the "Tugrah" (Caligraphic representation of the name) of Sultan Abdul Hamid II and the year 1318 (1900). This official Turkish stamp consists of the Sultan's Tugrah and a formula to the upper right which reads "El Gazi", which means victorious warrior of Islam.  Rev: A Turkish inscription in Arabic script which translates as Hamidian-Hejaz Railway Medal for Enthusiastic Service.

The Hejaz railway was started in 1900 at the behest of the Ottoman Empire Sultan Abdul Hamid II and was inaugurated in 1908. The Sultan proclaimed the building of the line as a holy undertaking and asked for contributions from all of the Muslims in the world. Involuntary deductions were made from salaries of all government clerks to assist with the funding of the project. German engineers directed the construction as the Sultan developed strong ties with Germany. Suspicious of foreigners, but unable to maintain power without their help, Abdulhamid recognized that the construction of a railway to the holy cities of Medina and Mecca would not only improve his image as Caliph of Islam, but also increase the tenuous hold that the Empire had on the distant reaches of the Arabian Peninsula. The railway was never completed, however, as violent opposition from Arab rebels prevented the construction crews from reaching Mecca. The Turkish Ministry of War took over administration of the railway in 1911, and during World War 1 it became the target of Arab guerrillas organised by the Sherif of Mecca, Hussein Ibn Ali, his son Prince Faisal, and a certain British officer named T. E. Lawrence, along with the "Arabian Detachment", "C" Fight of 14 Squadron R.F.C.

From 1902-1904 the Northern line was built. The railway ran from Damascus in Syria to El-Medina in Hejaz; a branch line from Haifa to the Syrian town of Dara'a went through Eretz Israel.

The medal came in both wearable and non-wearable versions ranging in size from 26mm to 50mm. The bulk of the medals had the Hegira date 1318, however special series of medals were issued bearing the dates 1322 (for completion of the rail link to Maan) and 1326 (for the link to Medina). The wearable medals were 30mm in diameter, issued in gold, silver and nickel alloy. Originally, the ribbon for all of the medals was red, about 20 to 25mm in width. Those who had made large enough donations to merit the silver medal felt they should wear a different ribbon to differentiate their awards, and so a green ribbon was instituted to replace the red ribbons on silver medals. 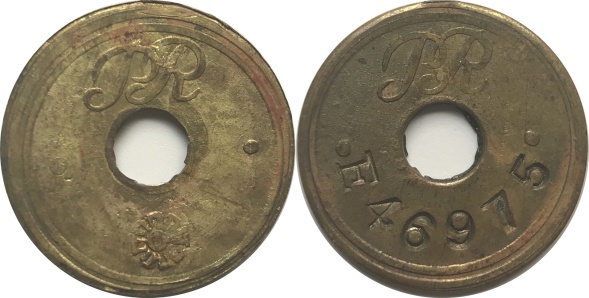 Palestine. Spinney & Sons (ND). Haffner  CC-11. JTM-11. Trading Store token issued during the British Mandate period. Brass token, 26mm, 5.86 grams. The identity is not certain, but it is certainly from either Palestine or Egypt probably during the 1920's estimated around 1924-1927. Obv: One piaster in trade. Rev: 62421. Large hole in center as issued. The reverse features the number 62421, meaning is unknown. Although this token does not typically bring the prices paid for the classic 1880's issues, it is very seldom seen in the market, especially this nice. A small group appeared in the market in 2008 which this is part of. Before that they seldom were seen and that group has been dispersed. 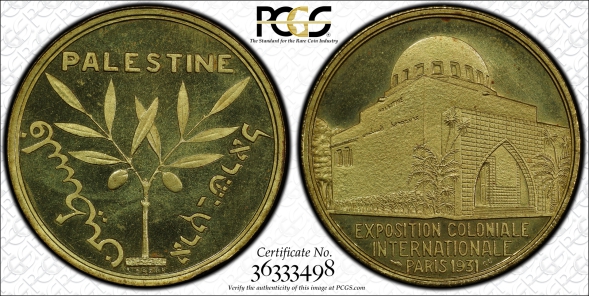 "Kofer Hayishuv" was an emergency taxation fund, established in 1938 by the Hagana Defence Forces for the purpose of financing security and other needs of the Jewish community ("Yishuv") in British Mandatory Palestine. The Kofer Hayishuv tax was levied on a multitude of services, for which a variety of receipts were issued, mostly in the form of paper sheets or stamps. In 1939 a metal token was issued which quickly became a de facto means of payment of general services, such as public transportation provided by Jewish-owned bus cooperatives. With the establishment of the State of Israel in 1948, the use of Kofer Hayishuv tokens was abandoned. 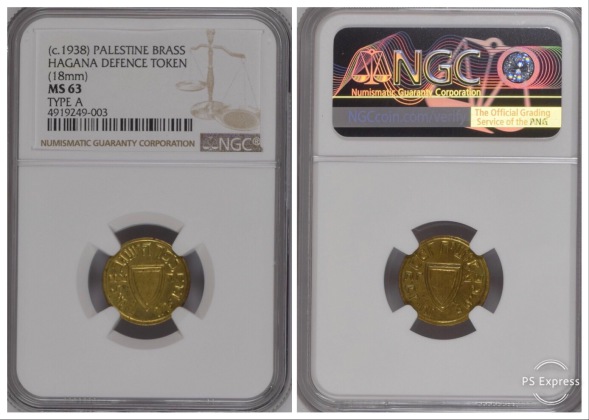 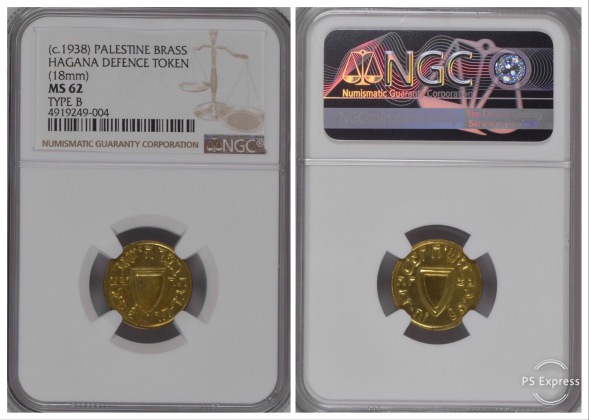