It would be easy to draw up a list of great world rarities - coins that would strain a king's treasury to buy. Fascination can come, however, not only from great rarity and dazzling price records but also from the story a coin can tell and from the historical context in which it was written. Coins have been eyewitnesses to the stirring and often violent events of the just past century. Coins testify to the birth or death of nations, recall vanished rulers and regimes, and bring revolutions and conquests into your hands.

At the opening of the 20th century, the name Israel was found only in the Bible or as a collective word for the Jewish people in exile. After the founding of Zionism by Budapest-born journalist Theodor Herzl, vast effort was expended in establishing what Britain's Balfour Declaration called a "National Home for the Jewish People" in what had been the neglected backwater of the Ottoman Empire, Palestine.

Despite growing Arab and British opposition, Jewish immigration accelerated in response to Hitler's wartime genocide in Europe. Unable to resolve the Arab-Jewish conflict, the British withdrew in May 1948, after the United Nations voted to partition Palestine into Jewish and Arab states. The Zionist leadership proclaimed the State of Israel on May 15, 1948. Already under attack by Arab irregulars, the new nation repelled several Arab regular armies, emerging with greatly increased territory after three waves of struggle.

To the new Jewish State, coinage had an unusually poignant significance. A start was made toward a new Jewish coinage during the 1948 fighting in the Mechsav cutlery factory in Tel Aviv's industrial suburb of Holon. The fall story of this coinage emerged only after the present writer's on-the-spot research during the 1979 American Israel Numismatic Association study tour to Israel.

The 25 mils was a 30mm coin of 97 percent aluminum, 3 percent magnesium, bearing a plain edge. The obverse depicted a bunch of grapes taken from a bronze prutah of Herod Archelaus (circa 4 B.C.). The stylized reverse wreath was adapted from coins of John Hyrkanos (135-104 B.C.) and was used in the later prutah series.

The exact number of coins bearing the Hebrew date 5708 (1948) is unknown, but certainly small. Little attention was paid to such details in the midst of war. A substantially greater number was struck dated 5709 (1949). The coins' overall quality disappointed the Treasury, and they were released only because of the serious coin shortage following the British withdrawal and the following war. 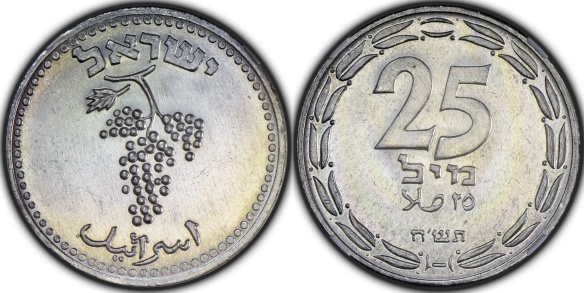 The Anglo-Palestine Bank Ltd., which prepared the first banknotes even before the State was declared, did not prepare coins. The first steps toward issuing coins were taken by the State itself after its establishment. It was done very quickly, after realizing that there was a shortage of British Mandate coins, which were then in circulation.

Israel's government requested proposals for the design of a new coin series from the Israel Numismatics Society. Until those were ready, a coin with a value of 25 mil was issued. The term "mil" was carried over from the British Mandate. The first coin in the new series, a 50 pruta coin, was only entered into circulation on May 11, 1949.

Contemporary written information on the exact location of the Mints is sketchy and contradictory. It is presumed that an initial unsuccessful batch of coins dated 5708/1948 was minted at a workshop in the Hakirya compound in Tel Aviv (the former German Templer colony of Sarona). The balance of 5708/1948-dated coins was minted at the Michsaf cutlery factory in Holon, a fact which is well documented. Michsaf also minted a large quantity of coins dated 5709/1949, probably the "Open link" variety. Several sources indicate that a sizeable number of coins were minted in Jerusalem, but no written documentation about the location and name of the Mint is available. 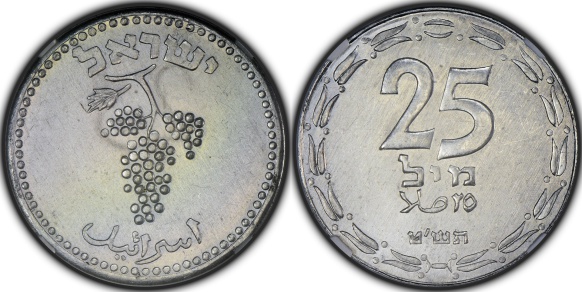 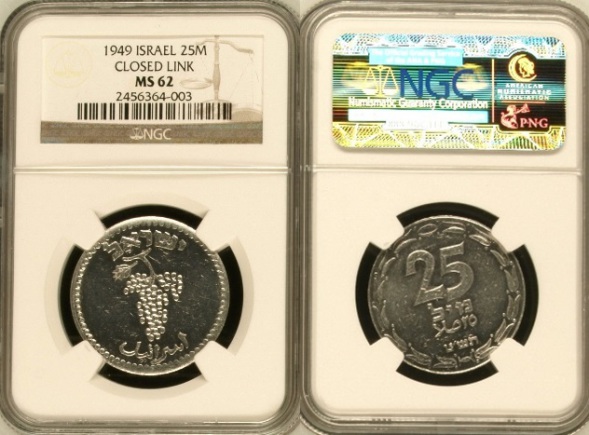 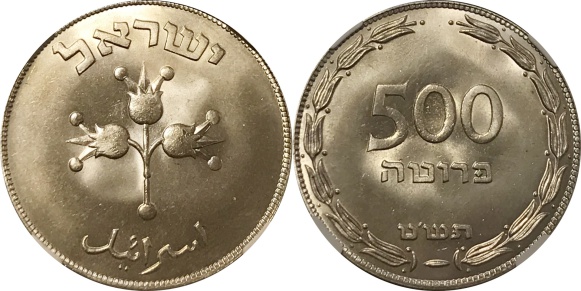