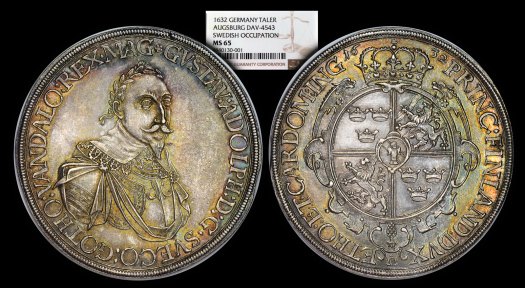 Augsburg’s coinage vividly records changes in the city’s leadership during the Thirty Years’ War. This taler was minted in the name of Gustavus Adolphus, the Swedish king who occupied the predominantly Protestant city beginning in 1632. Only a few years after this coin was produced, the Habsburgs recaptured Augsburg, and the city resumed producing coins in the name of the Holy Roman Emperor.

Lubeck, long a Hanseatic city, retained her independence until the arrival of Napoleonic armies about 1806. Her freedom was restored in 1813 and the free city status maintained until the 1930's. It is now part of the state of Schleswig-Holstein. 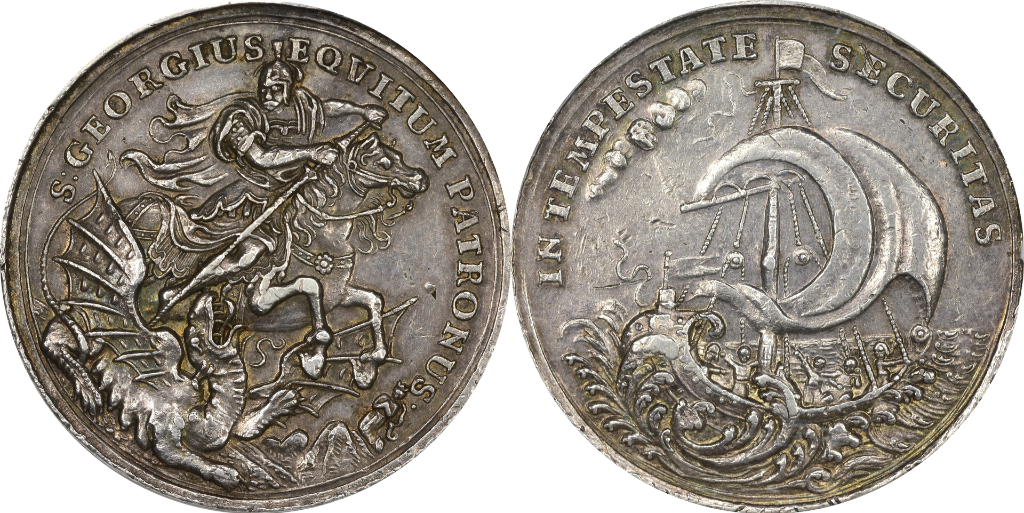 1780. Poland. Courland. Peter Biron (1769-1795) Albertus Taler. DAV-1624. Kopicki 4104. KM-32; Salv-89. Neumann 334, Kruggel/Gerbasevskis 7.1. Cr-23; Hcz-3410. Obv: Bust of Duke Peter Biron head right. Reverse: Crowned arms of Poland and Lithuania draped by a wreath and are atop a decorated frame. Original mint luster and beautiful, delicate silvery lilac surfaces. A special piece. Courland is situated in what is today western Latvia, From 1561 to 1795, the area was a semi-independent duchy. The land was owned by nobles descended from German invaders. In 1795, the last of these nobles, Peter Biron, sold the territory to Russia. The kingdom of Poland, weakened by the devastation of the Great Northern War (1700-21), fell under the domination of her neighbors, Prussia, Russia and Austria. Stanislas Leszczinski, a former lover of Catherine the Great, was installed as her puppet king on the death of the Saxon August III. When he proved to be insufficiently pliant, the partitions began. In three slices, in 1772, 1793 and 1795, the entire state was devoured. Even then, Stanislas could not rally the greedy and selfish Polish nobility to defend the country. Courland, now part of Latvia, was conquered by the Teutonic Knights in the Middle Ages and held by them until the Reformation led to their collapse. The region was contended by Sweden, Russia and Poland, with Russia the eventual winner. Duke Peter's father, Ernst Johann, lover to Russian empress Anna, was installed as a puppet ruler in 1737. Superb, beautiful, lustrous GEM. NGC graded MS-66. Finest graded.