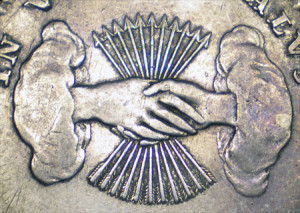 In 1789, Brabant Revolution took place in reaction to liberal reforms made by Joseph II and the Austrian occupation of Belgium. After Austrian forces were defeated by the rebels at the Battle of Turnhout in 1789, Austrian forces withdrew from the country. On 11 January 1790, the counties and dukedoms which had made up the Austrian Netherlands became one country, the United States of Belgium. The United States of Belgium coinage was issued in eight denominations divided into Liards, Sols, and Florins. It was only produced during the short one year lifespan of the country meaning that all examples are dated 1790.

The types minted were:

The iconography on the coinage stressed the unity of the state. On the Florin, this was represented by the individual display of all the coats-of-arms of the 11 states which had merged; on the 10 sols, it was represented by ten arrows behind a two shaking hands.

14 Florins and known as the "Golden Lion"